IRONSWORD interview - Words of the Brave

The Hyperborean Hordes are back. The mighty IRONSWORD is here once again in full force. The new album “None But The Brave” will be released during May 2015 by Shadow Kingdom Records and we called at once our brother Tann to have a few words after so many years. 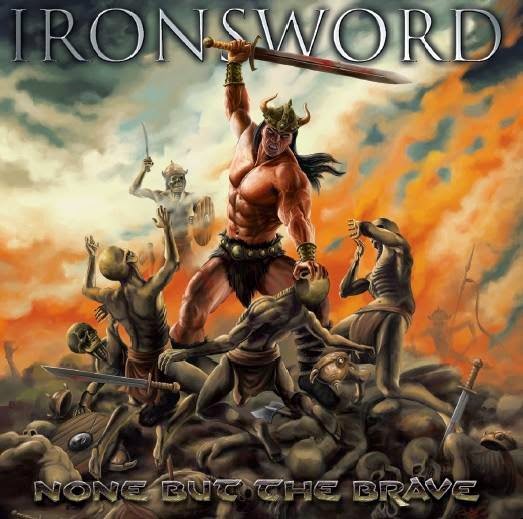 Long time no see. What have you done all these years after the release of "Overlords of Chaos"?

Well, contrary to popular belief, IRONSWORD has never officially split up or anything like that. Unfortunately, due to health problems, I had to hold back on live shows and new releases. But, all this time I kept playing and writing new stuff. Shortly after I ended up with enough rough songs which eventually some of that music led to the new album “None But The Brave”. But I kept on composing new material… now imagine the amount of stuff I have on the shelf!

For the new fans and metalheads, give us a brief bio of IRONSWORD. When did you forge the 'sword and how were your early years as a band?

The band was formed in 1995. Released 2 promo tapes between 1995 and 1998. The first album was released in 2002, then the second album “Return of the Warrior” in 2004 both by The Miskatonic Foundation. In 2008, the third album “Overlords of Chaos” is released by Shadow Kingdom Records. In between, several line up changes. Our first show ever was in 2004, at the Keep It True Festival in Germany. And I guess the rest is history…
The early years were tough, because we started more or less when there was the big trendy Power Metal boom in the mid 90s, where bands were just copying Helloween and Blind Guardian. Since IRONSWORD was totally the opposite, people didn’t know what to think of the band, so therefore, was not taken seriously for a long time. The media and major labels in general considered traditional Heavy Metal was out-dated. To get some promotion, you had to write letters and send tons of tapes to all fanzines. For some time, IRONSWORD was kind of one man band, because all of my friends had their own bands and didn’t had time to dedicate to another one. Finding musicians that wanted to play 80s Heavy Metal was really hard. We were supposed to release the first album in the late 90s by a German label but they went bankrupt. We started recording a demo tape in the late 90s but the studio closed down and we never saw the master tapes. We were supposed to be on a split single with METALUCIFER, but the label back then thought our song was not good enough. Those were the days of high adventure ahahah! The turning point was the release of our debut in 2002, that’s when things really changed for the band.

A new album is ready for release by Shadow Kingdom Records again. When did you start working on that one, and can you give us few more details regarding the songs?

I started writing new songs while still doing the mixing and mastering for “Overlords of Chaos” back in 2008. My main goal was to write music less complex than “Overlords of Chaos”, more homogeneous, more in your face if you know what I mean. Some might say “None But The Brave” is the continuation of the previous album, that it continues the same pace as its predecessors etc. I like to think that the new album is kind of the missing link between “Return of the Warrior” and the debut album. Anyway, it’s in the typical raw IRONSWORD style, that 80s underground molten metal we always did and will continue to deliver.

Being an IRONSWORD supporter since ages, for me every new album is better than the previous one, so "Overlords of Chaos" is so far my fave one. How do you see now the three previous albums?

Thanks for the support! You know, they are all very important albums to me and have a special spot in the band’s history. It’s funny because a lot of people say our best album is “Return of the Warrior”, others point out our debut or “Overlords of Chaos”. I’ve always had in mind to write quality heavy metal music, and reinvent ourselves at each release, it’s in my blood! But the most important thing for me, are the fans, they keep our music alive, and without our fans we are nothing! 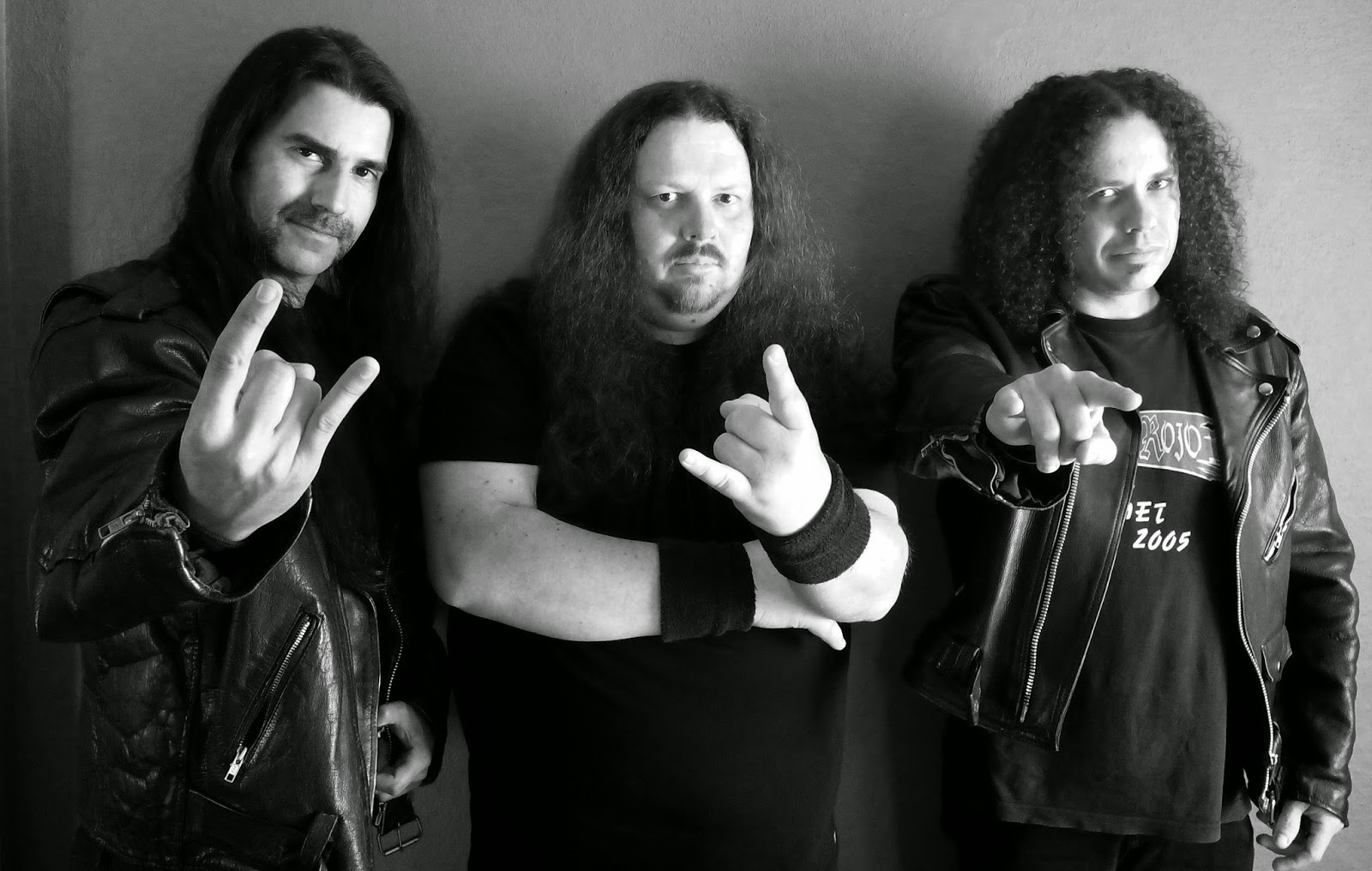 There is a change in the line-up, right? Also, you already start booking live shows with the first ones in the festivals Harder Than Steel (September 2015, Germany), Play It Loud (October 2015, Italy) and Up The Hammers (March 2016, Greece). Which are your plans for the near future?

The current line up is me on guitars and vocals, João Monteiro on drums and Jorge Martins on bass. Yes, so far we are confirmed to play at Harder than Steel, Play It Loud and Up the Hammers festivals, and there are more to be confirmed soon in Spain, Canada and in Portugal. I can’t wait to get back on stage and I am anxious to meet again all my “brothers” and friends. It’s going to be a big Heavy Metal family reunion! It’s going to be a blast for sure…
Plans for the near future? There are no plans really, I just want to continue writing Heavy Metal music from the heart and soul, and try to play live as much as my health allows it…

Have you been watching underground metal the last years? It seems that in metal music, underground is the new mainstream with many reunions, re-releases and hype over and there. What do you believe and what's your  opinion on that?

That is not something new to me. I have witnessed that before. New trends pop up all the time, may it be created by the labels or by the media. To tell you the truth, it doesn’t bother me. I honestly don’t care less…

If there is such thing, what is "true" for you in metal music, in general?

I’ve learned to trust and follow my gut! How do you feel when listening to ANGELWITCH “Angel of Death”, HEAVY LOAD “Singing Swords” or EXCITER “Heavy Metal Maniac”! There is no “true” or “false”, there is only Metal! HEAVY METAL! It’s the music that matters and it usually tends to speak for itself!

Where do you think IRONSWORD stand in today's metal scene?

We’ve been around for 20 years and I’ve never imagined we would last this long. Over the first years of the band it was extremely tough. We never followed the trends, but become somehow fairly popular in the underground, to the point where people appreciated our resilience. I’ve read somewhere we are considered sort of pioneers in a subset of genre, you may call it Epic Metal, Traditional Metal, True Metal, Barbaric Metal, Conan Metal whatever, being labelled as legends or cult band etc, I mean, I don’t even know where we belong or stand in today’s metal scene! Like I’ve said before, all this would not be possible if it wasn’t the undying support from our fans. Besides, we also got huge support from all the labels we’ve worked so far,  Miskatonic Foundation, Eat Metal Records, Metal Supremacy Records and of course Shadow Kingdom Records.

How is the metal scene in Portugal?

There’s been some development in the recent years. More live shows. More new bands coming out. There’s one band that really blew me away. THE UNHOLY. With a female vocalist and a very talented guitar player, they remind me somehow of early CHASTAIN and HELLION and a great humble attitude.

Can you give me just a word or two for the following names?

MANILLA ROAD:  Up the hammers and down the nails! My fave band of all times!
OMEN: Another fave band of mine!
SOLSTICE: I really like “Lamentations”! That’s classic!
RAVENSIRE: Just heard a couple of songs and it’s cool.
HYBORIAN STEEL: Our Metal Brothers!
BATTLEROAR: Our Metal Brothers!
WARLORD: One of the greatest Epic Metal bands ever!
IRON MAIDEN: Maiden are very special to me. I got completely hooked in Heavy Metal music because of them!
MANOWAR: “Into Glory Ride”, “Hail To England” and “Sign of the Hammer” are masterpieces! The last album I really liked was “Louder Than Hell”…
What do you expect for the new album, considering there is a base of die-hard fans that were expecting for your return years now... 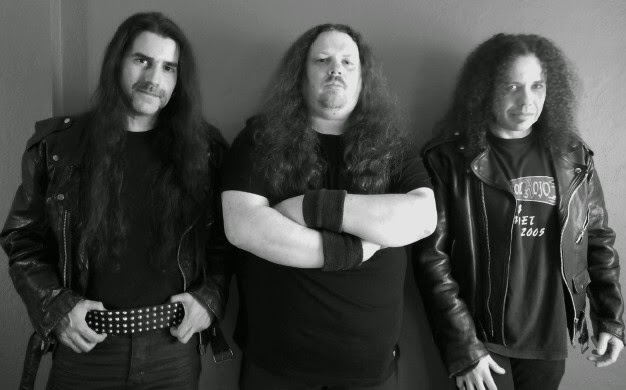 Ever since our label, Shadow Kingdom Records, placed online on their official facebook page, 3 advance tracks of our new album, I only have one word to describe it…INSANE!!! It’s been overwhelming the feedback we had so far. Some say its best album of 2015, best album of the band. Every release seems to surpass our expectations. I am extremely pleased about the way “None But the Brave” turned out, the production is top notch and it sounds fucking THUNDEROUS! The wait is worth it!

Thank you for doing this fine interview Andreas! Keep supporting underground Heavy Metal! Also a big hail to all our fans and friends! “None But the Brave” will officially be released in May, in CD, vinyl and cassette format!