Assassin's Blade interview: Under the blade of mystification...

Almost a year before, this new band named Assassin’s Blade, came to my attention. Shortly, I had the chance to listen to a 3-song demo from their upcoming album called “Agents Of Mystification”. I loved it at once. Now, the time has come that this album will be released and I had the chance to speak to bassist and songwriter Peter Svensson about this newborn metal monster. 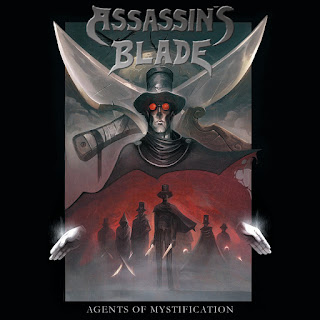 First of all, introduce us the pack under Assassin's Blade and when did you form the band.

Peter: The band was formed in 2014 and consists of Jacques Bélanger on vocals, David Stranderud on guitars, Peter Svensson on bass and Markus Rosenkvist on drums.

How did you get Jacques Bélanger in vocals and how easy or difficult is to work with such a distance?

Peter: I have been the webmaster of the "official" Exciter fansite since 2001 and I have been in touch with Jacques and met him a couple of times over the years. The beginning of Assassin's Blade is traced back in 2013 when David and I were putting some songs together just for fun. We then decided to record these songs and in a moment of whiskey-induced audacity we decided to ask Jacques if he was interested in doing the vocals. He agreed right away and flew to Sweden shortly afterwards to record vocals for 6 of the songs on the album. It was at that point we decided to form the band. From the initial recording session we got a good idea of how we should work together and were able to sort out a lot of things. After that we have stayed in touch through e-mails and Skype. We have all been open about things and what we want to do and there have not been any major issues caused by the distance.

Your first album is already completed and will be released by Pure Steel Records shortly. Give us all the available details, release date and tracklist.

Peter: The album will be released on the 29th of April 2016.The tracklist is: Agents of Mystification, Herostratos, The Demented Force, Dreadnought, Autumn Serenade, Transgression, Nowhere Riders, Crucible of War, Frosthammer, League of the Divine Wind, Prophet’s Urn
Also, Janne Stark (Overdrive and more) makes a guest appearance on lead guitar on several songs.

How was the writing and recording procedure?

Peter: The songs were more or less written by David and me. The arrangements were done collectively as a band. Jacques had a lot of input into the vocal arrangement and added some very cool things as well. Everything was recorded at my studio, except vocals on 5 tracks, which were recorded in Canada with Manfred Leidecker and Janne's solos were recorded by himself at his home studio.

Did you include all the songs you wrote in the album?

Peter: All the songs we wrote and recorded for the album were included. Originally we only wanted to release about 40-45 minutes of music on the album but we could not decide which songs NOT to include...

What's the story behind the band's name and what's your lyrics' inspiration?

Peter: The band name fits the image that we want to express with our music, it is aggressive yet sharp. Also, you can see the assassin's blade as the tool you need to achieve your objectives. Some of the lyrics were inspired by books written by Yukio Mishima ("League of the Divine Wind"), Jean-Paul Sartre ("Herostratos") and Calvino Italo ("Agents of Mystification"). "Dreadnought" was inspired by the war-ship and "Prophet's Urn" is a story about a prophet who foresees the end of the world and decides to take his own life before that happens.

What about the music? Which are your favorite bands and influences, how would you describe your music and what do you want to succeed?

Peter: Our main influences are the old classic bands like Priest and Maiden. Of course there is some Exciter influence as well, but in short, classic metal. Our aim is to make timeless heavy metal. We do not intend to sound like one band/album/era or anything like that, we just want to make great metal songs. Our main focus is to create something that we enjoy playing and listening to ourselves. 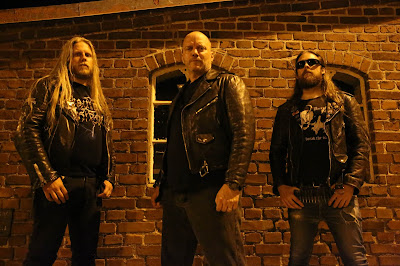 How do you see underground metal nowadays? There are plenty of bands out there...

Peter: Well, the underground is growing all the time. New bands and projects everywhere. Of course it is good but it also makes it a lot more difficult to stand out and get noticed by people. The amount of records that are released now is unbelievable.

Do you think there is a kind of hype with "underground metal" the last years? How do you explain the countless new bands, all the reunions (from everyone) and the amazing amount of reissues from old albums-demos-whatever?

Peter: Yes, there most definitely is a hype, however it's been going on for some 10 years now. Old bands that made one single in the 80s and new bands from everywhere. I think the old bands come back since they are at a stage in their lives where they might have more time than when they were in their 20-30ies and also that they easily see the interest in their bands through the internet. With new bands I think that the access to technology has made it so much easier to record and release music. Anyway, I don’t know how or if it should be stopped. How can you tell somebody that they are not allowed to play music?

Are there any plans for live shows?

Peter: There are no shows booked at the moment but we have been talking about a possible live set. Hopefully we can make a small tour or so of Europe in the near future since it is not feasible to fly over Jacques for a single gig.

What the future holds for Assassin's Blade?

Peter: We will start working on the next album right away. Also, hopefully there will be some live shows during 2016. I am really looking forward to where this takes us!

Any news on your other band's camp, Void Moon?

Peter: Yes, actually we are releasing our second album on the 28th of March. It is called “Deathwatch” and will be out on Sun & Moon Records, as well as a tape edition on Arcane Tapes.