Up The Hammers Festival 2017: The Might of Chaos Descends

Now the dust has settled. The might of Chaos was unleashed upon the (decadent since ages)  cradle of civilization, on May 27th, of 2017. 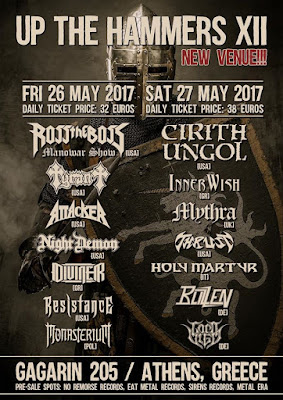 Up The Hammers festival (Athens, Greece) started from small basements, growing every year with hard work from the right people and associates, and on its XII edition, it moved to the best venue of its history. On May 26th and 27th, the 2-days underground metal festival took place at Gagarin 205 club with a line-up that was mainly dominated by the headline acts of Ross The Boss (performing Manowar) and Cirith Ungol. The strong support of metalheads around the world over the last years, helped Up The Hammers to move to the next logical step, that is a bigger venue. That wouldn't happen without the support of the metal hordes and friends coming from Germany, Italy, United Kingdom, France, Spain, Sweden, Norway, even United States or Australia and many many more places... Manolis Karazeris (promoter of the festival, along with Dimitris Papanastasiou of Music Box Prod.) thinking most of the times as a fan, had the right thoughts and ideas about the line-up of the festival, depending on its budget, and managed to establish it as one of the best underground metal festivals of our times, that was expanded with the support of the fans.

This year's edition was dominated by the performance of Cirith Ungol, one of the last two and most wanted reunions in traditional heavy metal; the other one is Heavy Load. Behind the Cirith Ungol reunion lies a fairytale gone right. Many people tried over the years, but finally it happened thanks to few individuals with most notable Jarvis Leatherby (founder of Night Demon and promoter of Frost And Fire festival), and of course the will of the band members. Cirith Ungol is hailed as an underground metal band and not a famous, maistream or established act, but I have to say that this specific reunion is one of the most professional and successful ever happened. Everything was organized slowly, correct and beyond our wildest dreams. The present line-up includes all the right members, with both Greg Lindstrom (he played guitar on the first CU album "Frost And Fire") and Jim Barraza (he played guitar on the last CU album "Paradise Lost"), since Jerry Fogle (guitar on first three albums) left this mortal world one August day of 1998. Tim Baker (vocals) and Robert Garven (drums) are of course here, and Jarvis Leatherby handles bass duties, since Flint isn't part of this reunion. Jarvis is also the manager of the band and another crucial thing is that Metal Blade Records (the best metal label in my book) is supporting Cirith Ungol with great reissues of their albums, among other things. Important label stuff are also supporting the band in person, and travelling in the Cirith Ungol shows, promoting and helping them. If we will add that at this period of time "old" metal is somehow back in the rails, this was the perfect timing for such a reunion. Traditional metal is not mainstream in terms of older times, but for sure it has more exposure in magazines (the ones left), many small festivals appear here and there, countless reunions of old bands (even ones with just an album) happen, and I can't even mention the hundreds reissues... And all these in a period where the music industry is a living dead entity, but still, things happen despite the low physical sales and the minimal support and of the younger generation, if we will compare them with the years that all these bands were active. On the other hand, when these bands were active back in the 80s, most of them were really underground and nowadays they play to wider audience. So this reunion really matters and deserves every success, and a new album is probably scheduled somewhere at the end of 2018. 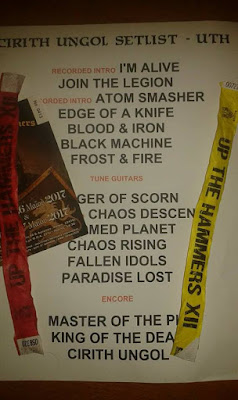 When Cirith Ungol walked the stage, on their third show after the reunion, everything we saw before was forgotten and the might of Chaos was unleashed upon us. Each band member performed with passion and it was obvious that they had many rehearsals before. The Cirith Ungol music is not 100% the best festival soundtrack, but it was exactly what the people of Up The Hammers wanted to hear. This was one of the best shows in the history of Up The Hammers festival.

The night before, Ross The Boss with a killer line-up including Rhino (ex-Manowar, Burning Starr) on drums, Mike LePond (Symphony X, Heathen's Rage, Silent Assassins) on bass and Marc Lopez (ex-Meliah Rage) on vocals, performed a special Manowar setlist with songs from his Manowar-era. You cannot fail when you play eternal hymns like "Thor" or "Blood Of My Enemies". These songs are so powerfull and unique, and this was a great festival addition, with guaranteed satisfaction for this specific crowd. I cannot even imagine what would happened if we would witness the real deal in this venue...

The only disadvantage of this festival, is that these two performances - names were by far superior than anything else we saw. There were more great acts and shows, but there was a significant difference between the headliners and the rest billing of the festival. Night Demon were amazing, though. These guys live and breath metal, and their shows are always full of energy. Probably one of the three or five best bands of the so called "new wave of traditional heavy metal". Other new bands should watch them and learn how to "work". When you play countless shows over the world and already have 2 great full-length albums in a period of three years, you are doing something right.

Attacker was another cool addition and this kind of US metal is needed in these festivals. Especially when the band members perform with passion, and you have songs like "(Call On) The Attacker"! US metal was represented also by Thrust who tried to kill the posers, Tyrant who killed our ears, and Resistance who was indeed a Metal Machine.

Myhtra was the surprise of the festival. It is always great to see some old bands performing with the passion of their youth. That was great, and also a NWOBHM band is always needed in this kind of festival. Lord Vigo from Germany was the second big surprise of the festival. Their paranormal doom metal was performed flawless and their stage performance was also special. Monasterium was the other doom metal band of the festival, and the Polish act was closer to the traditional epic doom style of Candlemass and Solitude Aeturnus, but both bands played in front of few people as opening acts of both days. Blizzen were just ok in their traditional metal style and Holy Martyr was a perfect addition even if I believe that the doom elements on their new album don't fit in the character of the band. However, none of us can tell to a musician how to play and I really enjoyed their "classic" tunes. Diviner and InnerWish were the Greek bands of the festival and both of them were professionals. Lot of people enjoyed their shows, some "old-school" metalheads didn't enjoy so much Diviner and many others would prefer a better setlist from InnerWish, since they supported mainly their last album. Fans from Greece are already familiar with them and have their opinion, but I am sure they gained some fans from abroad, even if they were different from the "true underground metal" character that few individuals have for a festival like Up The Hammers. At this point, with bands like InnerWish, I will have to mention that the sound was also very good at the venue.

10. Vince High: A performer with a  complete NWOBHM feeling.

9. Rhino: The triumph of steel. A metal machine.

8. Bobby Lucas: The leather lungs of US metal.

7. Ross The Boss: THAT guitar tune!

5. Greg Lindstrom: The silent force (aka: the man who wrote "Frost And Fire")

4. Robert Garven: The atom smasher. The master of the pit.

3. Jarvis Leatherby: The demon of the stage.


The first bands of Up The Hammers 2018 are already announced and tickets are already on sale. You can reserve your ticket HERE and trust me, this will be something you don't want to miss. 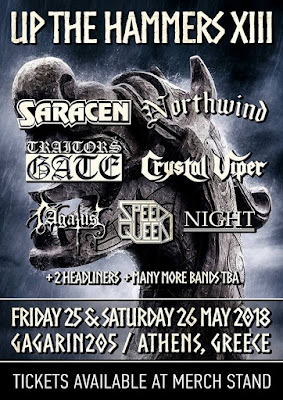