Ozzy Osbourne - Diary of a Madman 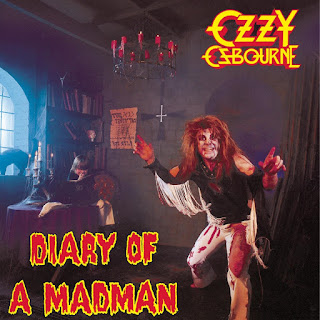 Originally released on November 7th of 1981 with a recording line up of Ozzy Osbourne (vocals), Randy Rhoads (guitars), Bob Daisley (bass), Lee Kerslake (drums) and Max Norman as a producer. While it is rumoured that Johnny Cook and not Don Airey played keyboards, producer Max Norman has stated that keyboards were played "by Don and that big ass CS80". Louis Clark is responsible for the string arrangements on the epic title track.

Back-to-back with Blizzard of Ozz, this second album is a band creation where all members deserve credits. However, no matter how iconic and classic this album is, back in the day it was recorded fast, without even completing or expanding the ideas they had, in the way they really wanted. Diary of a Madman was recorded and released very fast because the management wanted the band to go on tour very soon.

Before even the album was released, Rudy Sarzo (bass) and Tommy Aldridge (drums) took over the rhythm section for the upcoming tour and Daisley with Kerslake were out of the band. Both of them weren't very happy with the situation therein, they wanted this to be a "band", as it was promised, and not just supporting a solo artist. However, Kerslake's replacement was Ozzy's first choice even before the first album but he wasn't available at that time, while Bob Daisley was coming back again and again until No More Tears album.

Diary of a metal classic and beyond:

Over the Mountain: "Something in my vision, something deep inside". The album starts with a well known drum pattern that set a template for countless songs in the metal history. Actually, few years ago, Frankie Banali claimed that this is his intro from the early rehearsals of the band with Dana Strum on bass, and of course Ozzy and Randy, that took place in Los Angeles in late 1979. Randy Rhoads is mixing unique phrases and metal riffing with classical tradition from the opening track. Ozzy always had the charisma to locate pure talent and let his fate and ideas in their hands to expand them. He always had unknown guitarists that after his albums were considered iconic players, each in his time and beyond. Randy Rhoads already sounds like no other and in the years to come, many guitarists wanted to sound like him.

Flying High Again: "People think I'm crazy but I'm in demand". Drugs was a huge part in Ozzy's life, especially in the '80s. Cheesy lyrics but this feelgood rocker was a fave live hit in the United States. It is rumored that the tour dwarf Ozzy had on stage was Kenny Baker, the actor who played R2D2 at the classic Star Wars films. Ozzy used to call him "Ronnie"...

You Can't Kill Rock And Roll: "King of a thousand knights, pawn in a table fight losing to you". Memorable and great vocal lines with amazingly guitar work and melodies. Lyrically, it is an idea of Ozzy against the attitude of record companies until that time, and Daisley filled the lyrics. However, from that point and on, Sharon gets in the picture and Ozzy was never treated bad again from the record industry. Most likely he had the upper hand and the final word.

Believer: "People beseech me but they'll never teach me things that I already know". Starting with a plain but memorable bass line, "Believer" is a song that brings in mind some of Black Sabbath's glory. It makes no sense to think of better singers. These songs and this album need this voice. I cannot think of anyone else (no matter how good he is) to sing this songs and justify them. These songs are meant to be for Ozzy and he is their soul.

Little Dolls: "The pins and needles prick the skin of little dolls". Side B also starts with a drum intro and this time with a tribal rhythm. Someone might say that the music of this track is to happy for those lyrics, and also this is one of those "not finally completed" songs, since it is rumoured that the Randy solo that is used was just a demo recording and not the final one.

Tonight: "Good intentions pave the way to hell, don't you worry when you hear me sing". Ozzy always had ballads in his albums and some of them are really great. Daisley fills with some notable bass lines and once again, Randy Rhoads spreads his magic.

S.A.T.O.: "Now I find peace of mind, finally found a way of thinking". For some people it stands for Sailing Across The Ocean but most likely it goes for Sharon Arden - Thelma Osbourne (Ozzy's ex-wife) with the change in Ozzy's personal life and in the next months, on July of 1982, Ozzy and Sharon were married. There are even progressive elements in this track, with a weird intro and unorthodox scales. There is great drumming and bass lines on the background and Randy shines here with his licks and performance.

Diary of a Madman: "Sanity now it's beyond me there's no choice". During this period, there are some of the most known incidents of Ozzy's madness; Alamo, doves and bat bite. It is a weird coincidence that all this madness happened at the period around Diary of a Madman, so either he is a madman indeed, or there is a very well stractured professional business plan. The song itself, is a masterpiece and the strings arrangment unique and ahead of its time. You can hear violin and cello in a heavy metal song, in 1981... Progressive metal bands like Psychotic Waltz (just ask them) are highly inspired by this song (and album) and the stracture and aura of this track can be founded in late-Savatage, and even in songs like Queensryche's "Suite Sister Mary".

Diary of a Madman is the last album of Randy Rhoads, that died in a plane accident on March 19th of 1982, while touring with Ozzy in the United States. 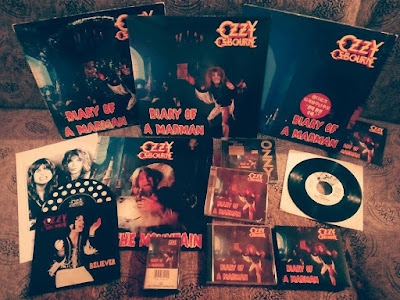