OPEN BURN interview - Music, Lethal, Divine Intermission and a band you got to know.

What is Open Burn? Eric William Johns on vocals, Dell Hull on guitars, Glen Cook on bass and Jerry Hartman on drums. Back to start. If you like progressive power metal, some names above might ring you a bell, since all of them are related with Lethal, besides singer Eric that has also a long past with bands like Simple Aggression.

Open Burn have their first full-length album just released via No Remorse Records, under the title "Divine Intermission" and we talked with all of them. You got to love Open Burn. 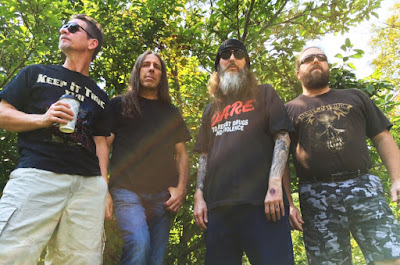 - When did you start Open Burn and what the name of the band stands for?

DH: I think Jerry, Eric and myself first started in mid 2015 playing cover songs at a benefit? Soon after we started working on original material. Glen joined us after we returned from Greece with Lethal in 2016. The term Open Burn is used in the U.S. by people who are actually burning fields or brush on their properties. You can usually see hand made signs posted "open burn" from time to time throughout the countryside wherever someone is doing this. I saw one of those signs one day on my way to the studio and sort of jokingly brought up the idea to the guys to use it for a band name. Glen said he liked it so it stuck. Haha.

EWJ: Since someone asked me, once they saw our EP artwork, what the cover was supposed to represent, I thought I'd give you all the scoop. Once we had decided on the name Open Burn, I went to work trying to think of a visual that matched the name and still had an identity of its own. What immediately came to mind, to me, was the chemical burn scene in David Fincher's brilliant film Fight Club. By the way, guitarist Dell Hull took the idea and ran with it on Photoshop to create all the artwork for the EP. He did a pretty amazing job, if you ask me...

- Which are your influences and besides bands and musicians, what things inspire you to create music?

GC: My musical influences are broad but the ones who had a real impact on me include The Beatles, Elvis Presley, Duke Ellington and Iron Maiden. As for ongoing inspirations, I believe they really just feed a chronic desire to communicate musically and might come from my family, my dog or anywhere else. From a practical perspective most of my musical inspiration comes from my band mates since that is with whom I am typically making music.

EWJ: I have answered the question of my musical influences dozens of times probably over the years. As far as why I make music, you have to first understand what music is. It is the oldest form of communication we know to exist. Listen to the whales in the ocean or the birds in the trees or the wolves in the forest. They all sing to each other. It's in our shared DNA. All of us. When I sing, all of the obstacles of language are removed. Its the only time when I communicate I feel anyone might understand me. Music is my tether to the world; without it I would float away.

DH: I guess music is just an outlet for me to speak without words. I draw basic inspiration from my long time musical influences, The Beatles, Led Zeppelin, Iron Maiden, Pink Floyd and Metallica. When I come up with a part or section of music that we play as a band I get additional inspiration from what my band mates add to it. I rarely know what they’re going to do but I do know it will always be good. That inspires me further.

JH: The guys I’m playing music with are my biggest influences. They make it easy to go to rehearsal and have a great time doing what I love to do which is play music. I’ve always been drawn to music from an early age and anything that had some kind of rhythm seemed to catch my attention. As far as bands, I like the classics, Led Zeppelin, Deep Purple, The Doors, Black Sabbath, Judas Priest, etc. I do listen to all types of music, new and old. There are always some new sounds and textures you can learn from and draw inspiration from
- Having three members from Lethal, does it mean that actually you guys wanted to write new music and somehow, something in Lethal was moving slow, so you started something new? Is Open Burn a different beast, which are the similarities and which are the differences with Lethal?

GC: We've all played in multiple different bands since no one band can outlet all of our inspirations. Starting Open Burn had nothing to do with Lethal. Eric hooked up with Jerry and Dell to play some cover tunes at a local benefit show. There was clearly some chemistry so they decided to put a band around it. Since I was in Lethal with Dell and Jerry and had been playing in another band with Eric for the previous 4 - 5 years (Graves Road) I was a natural fit when they needed a bass player.

EWJ: The biggest difference is that there is a different singer.  The next biggest difference is either one or two less guitarists (depending on which version of Lethal). As to the speed or slowness of Lethal, I was not in that band. It's not for me to say. I assume Jerry, Dell, and Glen wanted to make new music or they wouldn't have hung out with me.  All beasts are different beasts; just like all snowflakes are different.  Even identical twins have tiny differences...

DH: I think any similarities musically are just coming from our common influences. Glen and I first started playing together in Lethal in early 1983 so we’ve pretty much always had the same influences. I’m not trying to write anything new that purposely sounds like Lethal but at the same time I’m not trying to avoid it either. Just whatever comes out, comes out.

- You privately released a 5-track CD in 2017 and now a full-album under the title "Divine Intermission" is out on No Remorse Records with some same tracks in both releases. Are they the same or different recordings? Different mix? Where all the songs written at the same period and do you have more songs that probably are not recorded?

EWJ: The five songs on the EP are the same recordings that appear on "Divine Intermission" along with four songs that were recorded later.  All of them except the acoustic version of "Statues" (which is included as a bonus track, really), were recorded at the same studio with the same producer; just at different times. So the five songs that are on our debut EP are remastered on "Divine Intermission" to match the mastering of the 4 songs that appear on the album for the first time. I think each of us have plenty of ideas for the next record. I have a bunch of lyrics and melodies sketched out in my phone and laptop. I'm sure Dell and Glen have stuff too.  We work fast when we all actually are able to get together.

DH: Yeah, the songs come together pretty quickly when we start jamming on the ideas. I probably have enough newer musical ideas for 2 more full albums. At this point it’s just a matter of putting them together.

- What's the idea behind each song of "Divine Intermission"?

EWJ: The idea is to make good music. If I told the meaning behind the lyrics I have ruined the surprise and discovery of figuring out for yourself. If you really like the song; if you really want to know what it means, go and search. Discover.

GC: I would gladly spill the beans but Eric will not divulge any hidden meaning to us either, lol! One of my favorites on the album is "Mary's Lament" which is a reference to Mary Shelley and the monster she created. 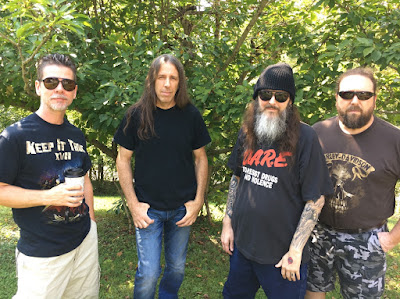 - How do you see the current status of metal music in United States? Are there any bands that you distinguish?

EWJ: I don't really listen to any music that I haven't loaded myself on my phone or flash drive that plug ins my car stereo.  That leaves me pretty oblivious to what is current in the metal world.  Unless I know them personally, worked with them in the studio, or played shows with them, there is a good chance I haven't heard them.  Friends of mine are routinely amazed that I have never heard of (insert band or artist here).  I'm just a creature of habit.  The old stuff still sounds good so I rarely deviate from the stuff I know for sure I will enjoy.

DH: I really don’t listen to much new music and really haven’t since the late 80’s / early 90’s. The scene got really stale for me then and most of the new music coming out, then and since, is really just a rehash of earlier stuff that I already liked. I suppose if I heard something with a fresh sound I would explore it more. I don’t mean to say there’s not any music since that I don’t like. I do like some stuff I’ve heard but I purposely don’t listen to it more than once or twice so I won’t be influenced by it. I’d rather stick to my roots for my influences.

- Speaking of United States, I can't pass the opportunity to ask a musician-artist like you, how do you see the current status of politics in your country?

EWJ: Nothing good will come from me answering that directly.  I would potentially be alienating half of my fan base at home who doesn't agree with my politics. Instead, let me quote the Gospel of St, Matthew (7:15) "Beware of false prophets, which come to you in sheep's clothing, but inwardly they are ravening wolves."  Each of you can interpret that how you wish...

- How did the Lethal reunion (at least for few live shows) happened?

JH: We are lucky enough to have fans that want to see us play. Martin Brandt contacted us in 2007 and put us in touch with the KIT festival and the rest snowballed from there.

DH: Like I said, Jerry and I started playing and forming what is now Open Burn in 2015 so that is really what led up to me joining Lethal for a few shows the following year. I’ve really been focused on Open Burn since.
- If Lethal will be active again (full active and not just posts in facebook) will it affect Open Burn?

DH: There’s no reason for it to affect Open Burn at all.

EWJ: I'm not in Lethal so I would have to wait and see how it affects me like everyone else.

- Are there any plans for live shows with Open Burn?

EWJ: I think we will play live shows at some point soon.  We are all older veterans of touring and know what a toll it can take on you.  It's hard to agree to that kind of strenuous endeavor the older we get.

DH: I would love to do live shows. The sooner the better with our new album coming out. Hopefully we can get some set up soon. 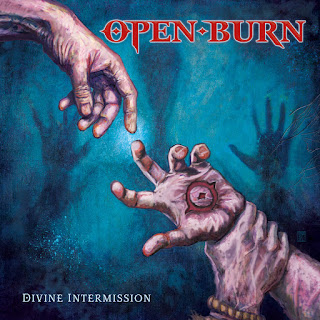 "Divine Intermission" is out now on No Remorse Records.