Cross Purposes: The story behind an underrated Black Sabbath album and era.

The true story of Black Sabbath lies between myth and reality. Myths are also part of the story and depending on the view, the viewer and the storyteller, some of those "myths" are different perspectives of reality.
written by Andreas Andreou 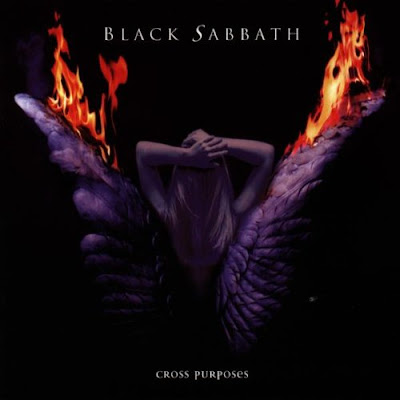 Cross Purposes is the most classic-sounding Sabbath album of the Tony Martin era, originally released in January of 1994. When singer Tony Martin joined Black Sabbath, Tony Iommi was the only member of the original line-up and many die-hard Sabbath purists considered those Sabbath incarnations after the Born Again album (1983) more likely as Iommi solo projects under the Black Sabbath moniker.

While The Eternal Idol (1987) was the first "meeting" (still a great record), the following albums, Headless Cross (1989) and Tyr (1990), featuring also drummer Cozy Powell, were a solid artistic statement of high quality heavy metal. On the other hand, those albums were a commercial let-down for the Black Sabbath brand name, and the poor U.S. distribution of I.R.S. Records played its role. Tony Iommi wasn't very satisfied with that fact, but that wasn't the only reason of the commercial let-down. Black Sabbath were out-dated.

Former Rainbow and Black Sabbath iconic singer Ronnie James Dio started his solo career after parted ways with Black Sabbath. The Sabbath albums Heaven and Hell (1980) and Mob Rules (1981) are among the best Sabbath albums but the live album Live Evil (1982) caused the final drift between Dio and Iommi/Butler. During the '80s, Iommi (and many other musicians) stated that Dio had an extremely selfish attitude. On the other hand, Dio couldn't handle Iommi's drug abuse and the mixing sessions of Live Evil ended the battle between the two parties. Dio was asked to leave. In 1990, Dio released Lock Up the Wolves, his fifth studio album, but like Black Sabbath, his commercial success started to fade.

Behind every great man there's a great woman. Or a woman that can decide for the man... For example, over the years it is known that Sharon Osbourne is the boss behind Ozzy and one day in the beginning of the '90s, two other women arranged a meeting as friends; Gloria Butler and Wendy Dio. The result was Geezer Butler meeting Ronnie James Dio, and then a phone call to Tony Iommi. After Tyr, the rest Sabbath members that recorded the album and completed the tour (Tony Martin, Cozy Powell, Neil Murray, Geoff Nichols) were each to his home or taking a break with other things. At that point, Tony Martin started working on his solo album Back Where I Belong but none of them knew what was happening until one point. More likely, Martin and Murray were removed from the band. Or they just didn't call them back. However, Dio and Powell didn't really like to work with each other and it was more than obvious that this collaboration will fail once the long recording sessions started. Dio wanted Simon Wright instead of Cozy Powell on drums but Iommi rejected him since he wanted Powell. Iommi called Martin to rejoin but it lasted for just a few days and a sequence of events led to the final solution: Tony Martin also wanted to finish his solo album, Cozy Powell had a horse riding accident and a broken bone. Meanwhile, Warner Bros Records offered the Dio reunion line-up a huge amount of money for a new album. With Powell off the picture due to his accident, drummer Vinny Appice was recruited and Dio was back in the studio since that was an accepted option for him. However, he didn't know that Iommi and Butler secretly called again Martin for demo sessions but the pressure of Warner Bros worked on Dio's behalf.

Dehumanizer, the sixteenth studio album of Black Sabbath was released in June 1992 but the line-up was once again short lived due to extended (again) conflicts between Dio and Iommi/Butler. The final conflict occurred when Ozzy invited Black Sabbath to open for his final (then) shows in Costa Mesa, California, United States. Dio refused because he believed that Black Sabbath shouldn't support anyone, especially Ozzy. If we will view Dehumanizer now, we can clearly understand that this album has a weird aura; it is an angry and awkward masterpiece full of drama, created between conflicts and different characters.

There might be a plan (myth, reality or part reality?) behind those events and different small stories that probably lead to a bigger idea; the reunion of the original Black Sabbath line-up, conducted by Sharon Osbourne. Tony Martin was an option as a replacement singer for Dio, for those shows, but he was in the middle of a tour for his solo album, plus there was a difficulty to get a visa for the United States, so Rob Halford joined Sabbath on stage.

After Dio's departure, Vinny Appice followed him and the idea of the original Sabbath line-up reunion seemed more complicated... or it just had to wait for few more years in order to get the correct contract deals. Someone knew better.

Meanwhile, the name Black Sabbath would release another album and Tony Martin was brought back again to work with Tony Iommi, Geezer Butler, Geoff Nichols and drummer Bobby Rondinelli (ex-Rainbow) who joined the band without any audition. The recording sessions were easy and took around a month for Cross Purposes to be completed. However, with the band's original line-up reunion on the works, there was a thought that it shouldn't be released under the Black Sabbath name. Finally, it was released as Black Sabbath.

The cover art of the Burning Angel (with Melodie Hampson as the angel model) is nearly the same with the cover of Scorpions' "Send Me an Angel" single that was originally released in September 1991. 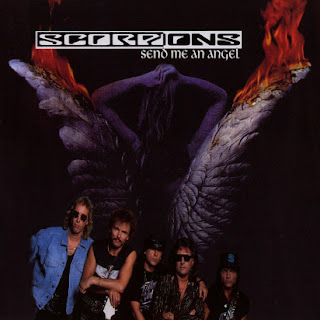 An interesting trivia is that Eddie Van Halen has an input in the song "Evil Eye" and came up with a solo for this song but couldn't be credited due to contract restrictions with his record label, Warner Bros. Eddie actually did played a solo to Iommi but it wasn't recorded on the song and Iommi redo it. Also, the song "Cardinal Sin" was originally meant to be "Sin Cardinal Sin" (or "Sin, Cardinal Sin") but due to an error, it was printed as "Cardinal Sin".

Lyrically, Cross Purposes is a diverse album and lyrics are written by Tony Martin, despite the fact that Geezer Butler was the primary lyricist in the '70s. "Dying for Love" is one of the album's highlights with exceptional lyrics about refugees, while "The Hand That Rocks the Cradle" is about Beverly Allitt, a children's nurse at a hospital in England who was convicted of murdering her patients in 1993.

But besides the lyrics, the music also is diverse and that's why Cross Purposes is the most classic-sounding Sabbath album of the Tony Martin era. Because '70s Sabbath was a diverse band. When Tony Martin visited Greece in 2012, he told the author of this blog that Cross Purposes is probably his personal favourite album from the ones he recorded with Black Sabbath. There is a variety of songs, from the emotional power ballad "Dying for Love", "Cross of Thorns" with its dark, lyrical atmosphere and a magnificent solo by Iommi, "Immaculate Deception" with its haunted keyboards, the doomed and gloomy "Virtual Death" that brings in mind some of the '70s Sabbath aura, "Cardinal Sin" that has a Led Zeppelin "Kashmir" touch evolving to a powerful riff-driven explosion. And everything with a clear production and mix. 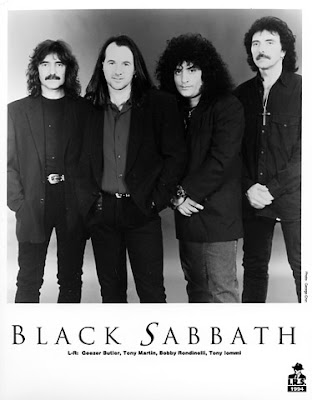 A tour followed to support the album but Tony Martin suffered from a throat infection at some shows, including the one that was recorded and filmed for Cross Purposes Live video (1995).  What many people don't know is the fact that before the South American shows, Bobby Rondinelli left the band because his new manager wanted a new contract and his demands were rejected by Gloria Butler that was handling such issues. However, Rondinelli returned during the Forbidden tour. Bill Ward was brought for the South American shows, so at that time, you had the original Black Sabbath line-up with Tony Martin instead of Ozzy! And Geoff Nicholls on keyboards, who was credited as a band member in the recordings of Cross Purposes but once again, they kept him out of the writing credits... Shortly Bill Ward was gone and there was some tense between Iommi and Butler. When Iommi fired Gloria, Geezer also left Sabbath.

In 1995 the Tyr line-up was resurrected and Forbidden was released. That was the end of that era.

Now, 25 years after Cross Purposes, the original line-up reunion and tours, the Heaven & Hell The Devil You Know album and reunion with Dio, the 13 album with Ozzy and The End, it seems that there is no bad blood between men that lived a life in ups and downs. Just the legacy. And a hope that we will see again Tony Iommi work with Tony Martin. Even for a while.


Tony Iommi has confirmed that he is working on remaster and remix of the last studio album with Tony Martin, Forbidden. There is not any estimated release date yet, but Tony Martin has also been contacted by Iommi to see if he is willing to record a few bonus tracks for the reissues of the Tony Martin-era Black Sabbath albums that will follow in the next years.