By album opener we want to mention songs (but not instrumental tracks) that have a small intro attached to the main track, or/and a separate music theme or riff, or effects, or starting with a solo, even if all of those elements can continue or included again within the track. Something that works as a way that leads you to the album, but is (in) a completed song. The kind of album opener that is not a separate intro or just a regular song. Not all albums have this kind of an "opener" and we are picking the ones we consider as favorite, greatest and iconic. The TOP ones according to Crystal Logic. 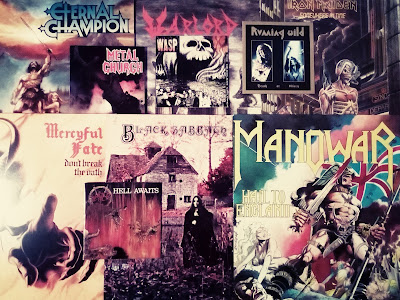 You can't easily beat Judas Priest's "The Hellion" but this is an intro. Iron Maiden's "The Ides of March" is instrumental and "Princess of the Night" a song that could be placed anywhere in Saxon's "Denim and Leather", even if we are used to it as the opening track of the album. These examples are not what we're talking about.

So let's lay down our favorite album openers.

The line: Face in the wind, we're riding the storm, we'll stay our course whatever will come.

The line: Like a wolf in sheep’s clothing you try to hide your deepest sins - Of all the things that you’ve done wrong and I know where you belong.

Opener to the album Somewhere in Time (1986)


Rainstorm. Church bells. THE riff. A desperate voice. A figure in black that points at you. A sinister aura that guided Tony, Geezer, Bill and Ozzy to write and perform this song. One of the most disturbing tunes someone could hear until 1970. The beginning. The Big Bang of Heavy Metal. It has to be here. It is here. Forever and ever.

The line: Oh no, no, please God help me!

Opener to the album Black Sabbath (1970)


4. Warlord "Deliver Us From Evil"


Destroyer and Thunder Child formed the best alliance. It is amazing how Bill Tsamis and Mark Zonder managed to complete each other and even if Tsamis is the sole composer, I can't imagine Warlord with another drummer. And "Deliver Us From Evil" is the song that will justify this statement.

The line: Deliver us from all the sin and we who believe will eternally sing these words in which we call the battle hymn.


Funny how few bands fall in certain genres or categories only because of a few albums or their image. W.A.S.P. is a heavy metal band and The Headless Children one of the best US metal albums ever. And this album has one of the most impressive openers anyone could ask for.

The line: The seeds of all evil are sown in their minds and harvest the sad fields of woe.

Opener to the album The Headless Children (1989)


6. Metal Church "Beyond the Black"


One of the most important US metal bands. Highly influential for the metal scene of Seattle and mid '80s thrash metal bands, since Metal Church balanced between power metal and thrash metal. However, in my record collection, I don't place their albums in the "thrash metal section". "Beyond the Black" is one of those few songs that sum up everything USPM stands for, and even more. You can just ask bands like Sanctuary and the answer is there. By the way, Metal Church! Isn't it one of the coolest band names ever?

The line: We unite as one, no more weapons, no more guns.


You can't complete any list related to heavy metal without having Manowar therein. Even if they don't fit, you need to find a way to add them. You're not a false one, are you?

The line: The ride of the wicked, the first sin was trust.

The line: They should have known not to play with the powers of Hell.

The line: What you seek for can't be found, in sea or sky or underground.


Not to be crossed! A modern classic. The ultimate epic metal opener of our times and for the years to come. Only Eternal Champion could come with a better epic metal opener in the future. The drums of doom, the marching tempo, the Oliva-like scream, the riders of Tarsul, the guards of Lourn, the Pyre Forge, the HAMMER.

The line: I warned them once I am the Hammer.