"Oh won't you come with me?" – 30 years in Annihilator’s Never, Neverland. 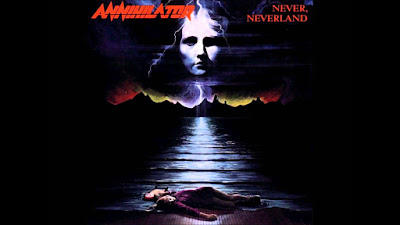 30 years since the release of the best Annihilator album. 30 years of a room full of toys and things. "Toys and things" that are here forever: Jeff Waters' unmistakable guitar performance, THE songwriting, Coburn Pharr’s voice, THE songs, THE album; Never, Neverland.


OUR SOLITUDE HAS BEEN DISTURBED.

It was obvious in the late '80s, the decade where heavy metal took its final shape that things were going to change in the '90s. And when the late Warrel Dane was preaching "so ends a decade now what will the nineties hold" in Sanctuary's "Future Tense" that was released a few months before Annihilator's second album, another decade would turn the page to new things. New toys and things.

We're on the edge of things that ended and new things that begun. Annihilator stand somewhere in-between, faithful to the core of heavy metal music but with a talented guitarist-composer that presented something new in thrash metal. Or heavy-thrash metal if you prefer. I don't really know if Jeff Waters has taken the credit he deserves as a guitarist, mainly because his style isn't as influential as other major guitarists but he definitely is better than many of those "others".

...on a second thought, he is somehow influential, both as a guitarist and songwriter but you don't really "hear" that influence in traditional heavy and thrash metal bands. However, you can find this influence in later American bands, mostly the kind of bands that are more known in the United States or bands that the regular resident of Ozzfest might have seen a couple of times.

Born on February 13th of 1966 in Canada, Jeff Waters formed Annihilator in the year of Judas Priest's Defenders of the Faith, Iron Maiden's Powerslave, Slayer's Haunting the Chapel, Voivod's War and Pain and Van Halen's 1984. It took him years of practice, demo tapes, macaroni and cheddar cheese, a few parties and the meeting with John Bates, until the moment where an album was released in the April of 1989 with an acoustic intro leading to that terrific track with the massive guitars… Isn't it frightening?

"Sitting in the corner, you are naked and alone. No one listened to your fears, you've created me"… and he never looked back. Alice in Hell was a huge success. A debut album that came out of nowhere and became an instant classic that remained in the halls of eternity.

Jeff Waters already had songs written during the former years and the next album didn't take long and was released just a few days before Megadeth would unleash Rust in Peace with their new line-up including Marty Friedman. However, before Friedman joined Megadeth, Both Dave's were fans of Alice in Hell and Jeff Waters was even offered the guitarist position in Megadeth. And we're back on that "second thought" above: Jeff Waters is an influential guitarist and songwriter!


WELCOME, I INVITE YOU OFF TO THE OTHER WORLD.

Jeff Waters, the man who knew the material better than anyone, co-produced Never, Neverland with Glen Robinson who also engineered and mixed the album that was recorded during February - April of 1990. Never, Neverland is a goldmine of amazing riffs and solos, harmonized guitar wizardry, memorable and catchy melodies and at the same time, it is fierce, black and wicked. Not in a Manowar way, but as an insane voyage to new territories for thrash metal.

Coburn Pharr's vocals offered a classic heavy and power metal touch to the songs that was very different from previous singer Randy Rampage's approach in Alice in Hell and probably better than Aaron Randall's nasally performance in the next album, Set the World on Fire. That was also a cool (heavy) metal album but in many moments it seemed that Aaron was fighting with the "s" letter. Coburn Pharr's performance in Never, Neverland is solid and I can't imagine this album with any other singer. He definitely deserves his own credit to the album’s timelessness.

The album's production is clear and clean. It lacks roughness and perhaps a random '80s German thrash metal fan might find it very polished for a thrash album, but you can hear everything perfectly... and that's perfect! I remember being in the high school sometime before the release of Annihilator's third album when a friend of mine that was deep in the Pearl Jam debut album and the first two Alice in Chains albums that were released in the same era, asked me to give him "thrash metal" to have a listen. I gave him the cassette version of Never, Neverland and just the next morning he told me, "I asked for thrash metal, this is lighter than Dirt". Oh well… "It’s definitely not dirt-y", I responded and the next day I gave him Bonded by Blood. He didn’t like Exodus but in the end he became a fan of Annihilator.

The songs? Oh my… Lyrically, you can find weird, mental and psychological issues ("The Fun Palace", "Never, Neverland", "Phantasmagoria"), man's greed and nature's poisoning ("Stonewall"), the fear of annihilation ("Imperiled Eyes"), even a macaroni and cheese dinner ("Kraf Dinner"). Jeff Waters used to get inspired by everything at every time. A certain mood, a walk in nature, the news, a dinner…

As for the music, I grew up listening to the cassette version, later the vinyl and from some moment and on, the CD version. I revisited the "analogue" formats while writing this article and somehow, with the album split in "Side A" and "Side B" it hit me like a maniac. Side A is more melodic, catchy and diverse with songs like the awesome opening of "The Fun Palace" with its panic riffage, the crystal clear bass and Pharr's "psychic house of horroaars!" line, "Stonewall" (a "sell-out" according to a few thrash metal fans back in the day), "Sixes and Sevens" and the same-titled track, while on Side B lies the glory of thrash metal with the technical thrash majesty of "Phantasmagoria" (one of the greatest Annihilator tracks ever) and the closing of "Reduced to Ash" and "I Am in Command", a pure thrashy holocaust. 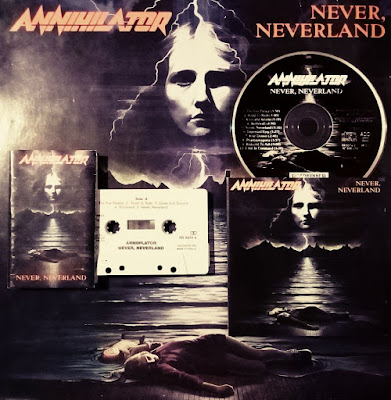 Just like Melissa or Don’t Break the Oath? Crimson Glory or Transcendence? Alice in Hell or Never, Neverland is one of those difficult dilemmas in the history of metal music, even if the author of this blog prefers the second in all of these cases. 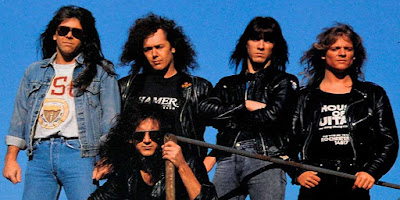 EVERY NIGHT MY DEMONS YOU WILL SEE.

Back in those days, every great album must have an extended supporting tour and Annihilator were lucky enough to join one of those legendary tours. At the release of Never, Neverland, Annihilator already started touring in Europe during September, and from October until the end of 1990, Never, Neverland Tour was moved in the United States for an estimated number of 50 shows in total.

Then, just when 1991 entered, Annihilator joined Judas Priest in their Painkiller Tour in Europe, along with Pantera for an estimated number of 50 more shows, with a small break in the end of February to visit themselves alone Athens, Greece. Nearly 100 dates supporting Never, Neverland, and they played all over the United States and Europe. Half of the shows with Judas Priest and Pantera, meaning you have the bands that released Painkiller, Never, Neverland and Cowboys from Hell the same year, sharing the same stage.

I can’t imagine a better scenario for a new band, with a great new album just released and a label like Roadrunner supporting them. So, what happened?

Well, the '90s happened… verging on the edge of an age. And also, too many line-up changes in the Annihilator camp. Jeff Waters released a few more great albums over the years like King of the Kill and Carnival Diablos, he kept touring all over the world and then he built his Watersound Studios in Durham, UK.

Thirty (30) years later, Never, Neverland still remains the ultimate Annihilator album, a "once-in-a-lifetime record". Jeff Waters still remains as one of the greatest thrash metal guitarists and a dominator on stage; a guitarist-frontman.