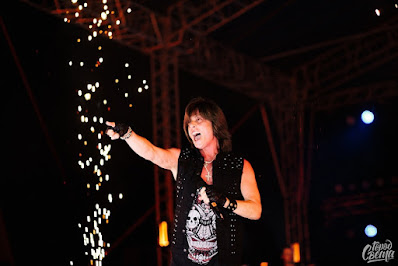 
The general idea was how a few bands continue performing and releasing new music, and keeping the "brand name". There is definitely controversy behind those acts and different views.


The "older" artist that can't perform or compose music as good as before, his retirement or replacement by another artist (most of the times younger), a change in the "rights holder", and the thrust to perpetuate the presence of the "old brand" that is more safe than risk with something new. Even if that "older" artist was the founder or the primary songwriter. It doesn't matter anymore in the music industry and at that point we reach the morality issue.


The same questions that were originally posted in that article still stand for the future of music and they look more relevant from time to time. What will happen when all these old and major acts will retire? Is the music personified or just music matters even if the "persons" are not there? Is there a morality issue? Or is it just music after all? Or simply, everything about major acts will be just business, like there is a businessman that has bought a big band (or bands) and hired managers to handle his investments, no matter who is in the band? This is what was written back in March of 2018.


Joe Lynn Turner, one of the most soulful and expressive vocalists of rock, hard rock and AOR, started his career in the '70s with Fandango. His fame reached the sky when he replaced Graham Bonnet in Rainbow, performing in the albums Difficult to Cure (1981), Straight Between the Eyes (1982) and Bent Out of Shape (1983). After Rainbow's break-up and the Deep Purple reunion, Turner released his classic solo album Rescue You (1985) and later he joined Yngwie J. Malmsteen's Rising Force performing in the album Odyssey (1988).


Turner's career never stopped since then. He briefly joined Deep Purple recording the album Slaves and Masters (1990), he kept releasing solo albums, he worked with Glenn Hughes in the Hughes Turner Project, he had many guest appearances and was part of a few more bands. At some point, Joe Lynn Turner formed Sunstorm and the debut album was released by Frontiers Records in 2006.

And then, Joe Lynn Turner made an announcement: 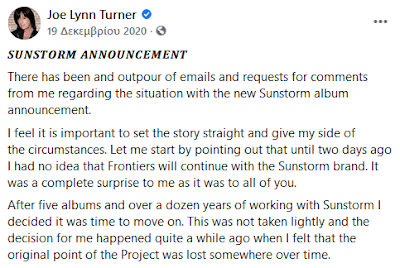 Few weeks later, a new line-up and story was revealed by Frontiers Records: 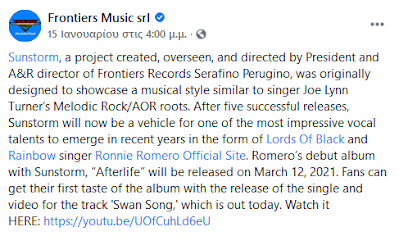 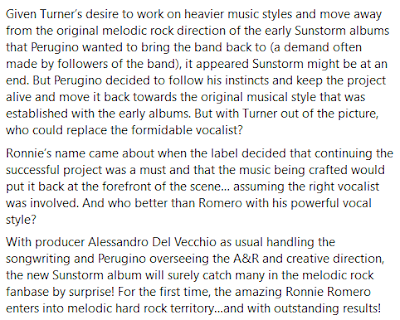 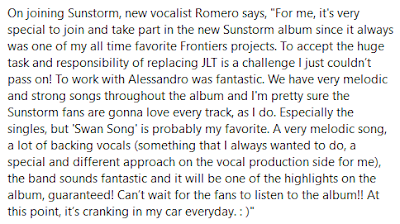 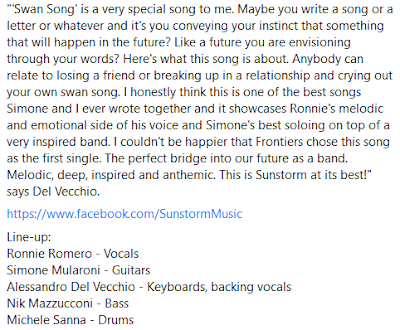 Frontiers Records is a label that has released countless projects in the wider field of hard rock and AOR, including respectful artists and a few of the greatest ones. So, besides brand names and classic bands like Journey and Whitesnake, among Frontiers' catalogue you will see many familiar names participating in new bands-projects. Most of those projects were an idea of the label that also used a specific songwriting team and similar productions. A few of those albums were really great, others didn't really work, but mostly there was a specific standard and sound.


We already have reached the moment where a label is actually the "band". The label forms the band and the name, has the rights, sets the course and how the "band" should sound. The artists performing are actually the employees and the label is the boss who even guides the "artistic vision".


Sunstorm moves on without Joe Lynn Turner and any of the members that performed in the first albums but what's more disturbing is how the music industry  treats a legendary name like Joe Lynn Turner. Actually, they're just erasing him presenting Sunstorm as a label project whose members don't really matter and the name is above everyone. And here we're reaching again the morality issue and the questions mentioned in the beginning.


There aren't easy answers. And if there are, those will change over the years, just like how the music industry is changing. Actually, there are many different answers depending on the person. Musicians, people working in the music industry, promoters, fans. Everyone might have a different perspective. Some musicians might not be able to keep performing and the "brand name" will continue without them in a mutual agreement (and a contractual agreement depending on the name). Some fans will just say that they prefer other (replacement) musicians as long as the music is "better" performed, no matter if there won't be any original member left. Record labels and managers might become the new "rights holders" and keep those "brand names" they way they want, and in the end, the music industry can change so much that at some points, music won't be personified at all. It won't matter who was previously in the band and who formed it, even if he was Joe Lynn Turner. It doesn't even matter the name. THEY say.


But what Joe Lynn Turner has to say? 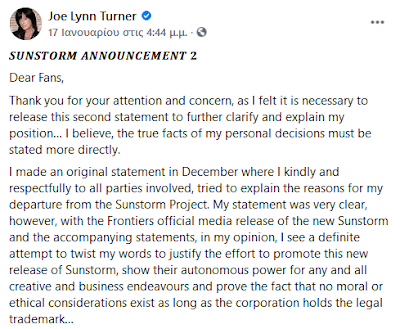 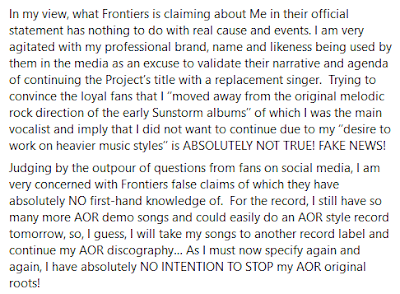 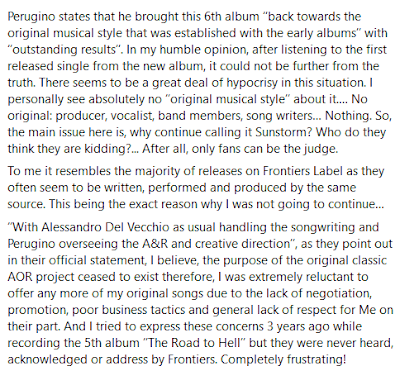 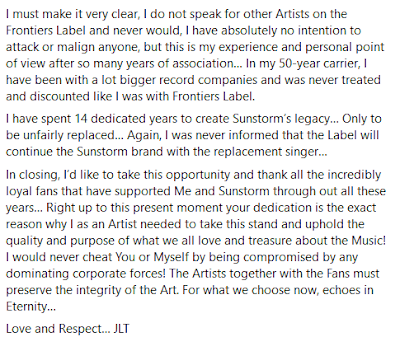 Is Joe Lynn Turner another "random guy" performing in one of those projects that doesn't really matter mentioning his name? Just after Frontiers' statement, Ronnie Romero, the new singer of Sunstorm wrote: 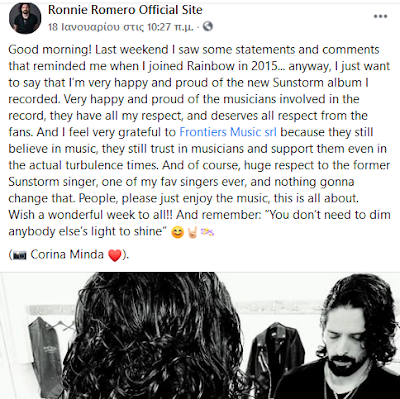 How did Sunstorm really start in the end? 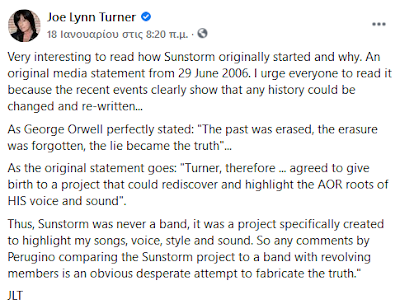 It seems that in the end, the music industry is so powerful that nothing else really matters. They can even change history and the past, they can even set the future.


The author of this blog works in this industry for many years and has seen many things, but in the end, RESPECT is not just a random word. This is something you always must keep in mind. And Joe Lynn Turner isn't also a random guy or the nameless "former singer". Always respect the true history and the past and don't let "edits" change it.


Feel the music. Respect those who offered you moments that shaped your music life, and wrote the real history.