Celtic Frost's "Monotheist"... and the end.

Monotheist was released on May 29th in 2006. This is the best reunion album of extreme metal. Let's have a look in the abyss... 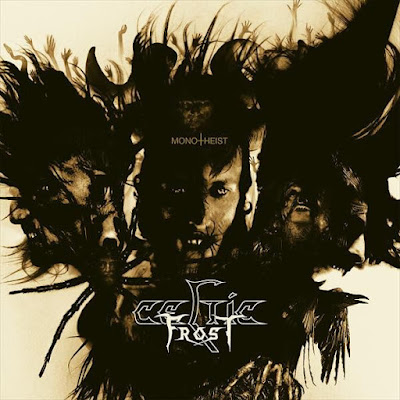 Hellhammer was buried. After the triumph of death, the mysteries of perversity brought Celtic Frost from the demon entrails. Morbid Tales (1984), Emperor's Return (1985) and To Mega Therion (1985) are among the foundations of extreme metal, and Into The Pandemonium (1987) is a genre-breaking record that introduced us widely the term "avant-garde" in metal music. An experimental dark album with undeniable influence.

The overall influence of Celtic Frost was both musical, artistic and visual. Up to that point, the Swiss band was the ultimate ground-breaking metal act. Martin Eric Ain was separated from Celtic Frost during the recordings of To Mega Therion but returned very quickly and even if Tom Gabriel Warrior was the prime composer, Martin was the link that completed the gaze into the abyss with his contributions in lyrics, music and image.

Cold Lake (1988) was one of those disastrous decisions in the change of musical direction, Martin Eric Ain wasn't there and Tom G. Warrior doesn't want to listen to this record again. However, despite most cases in the music industry, Tom has no problem admitting that this album was a failure, a mistake he did misguided and should never happen. Vanity/Nemesis (1990) marks the return of Martin Ain but fans must have felt betrayed and drowned in a cold lake, so after a while, there was silence. During this silence, the impact of Celtic Frost, one of the most original and eccentric bands in metal music, was growing over and over...

After talking again and planning the reunion, it was finally in late 2001 where Tom Gabriel Fischer (Warrior) and Martin Eric Ain began to write music together again, along with Erol Unala on guitar and, from late 2002, drummer Franco Sesa joined them, as equal members. At that point, Tom and Martin wanted to offer an artistic conclusion of what Celtic Frost is. The album was recorded in different studios, starting in 2002 and completed in the end of 2005 under the title: Monotheist.

Monotheist is the true essence of Celtic Frost. This album isn't a simple reunion, this is a return to form that made their legacy stronger. "I am you. Stillborn. Into this state of being numb" are the first words of 'Progeny', the opening track and "I am hatred, seeping blood" are the first words of the second track, 'Ground', both of them starting loud and heavy, with an abyssic tone. Then, you have the third track, 'A Dying God Coming into Human Flesh' followed by 'Drown in Ashes' and all is cold; flesh, too. After diving deeply in the music and lyrics, you start feeling a misplaced reality of total darkness where there is no hope, where everything ceases to exist and some things seem unavoidable. Not cathartic, just unavoidable.

The following track 'Os Abysmi Vel Daath' is where Ain and Fischer enter the abyss, taking all of us with them in nothingness. There is sorrow, pain and loneliness in this album, a chilling gaze into the abyss, where there was never light, just the reflection of darkness. In 'Obscured' you can feel the loneliness, the empty space and oblivion, while in 'Domain of Decay' the existence is left behind. "There is no God but the one that dies with me", line from the song 'Ain Elohim' might summarize the general idea behind Monotheist. The way Tom G. Fischer pronounces words like "flesh" and "wrath" is beyond evil and Tom's performance in Monotheist is his best of all the Celtic Frost albums. He is morbid and grotesque, a true artist, not an act. The Triptych part of Monotheist starts with the unspeakable 'Totengott' followed by the 14-minute blasphemy of 'Synagoga Satanae' and completed by 'Winter', the third and final chapter of Celtic Frost's Requiem. 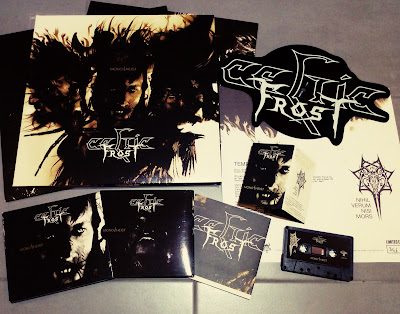 Monotheist was produced by Celtic Frost, and Peter Tägtgren was employed as co-producer because they wanted the input of someone from the then contemporary scene, while they retained full decision power. Moreover, as mentioned by Fischer, they were unhappy with Tätgren's mix and later mixed the album again themselves in Switzerland. This is the version that was released, even if the album credits we know are slightly different.

Few months prior to the release of Monotheist in 2006, Martin Eric Ain, one of the main responsible persons for the visual artistic direction of the album, visited the offices of the label (Century Media) and unfurled full-color printouts of the complete layout, including final artwork for everything (both CD and vinyl) and provided detailed explanations about all symbolism, meaning and importance of what he presented. 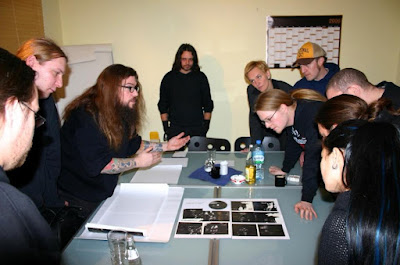 Photo taken on January 16th of 2006, courtesy of Century Media Records. At that time and after the years of Noise Records with the problems and artistic limitations they had, they knew exactly what they wanted and everything was done under their control. It was the time when Celtic Frost finally presented everything the way it should be. And while there are many people that don't consider Monotheist as the "best" Celtic Frost album, this is definitely the ultimate and absolute Celtic Frost album.

There is also something else about Monotheist. And Celtic Frost also. And Tom Gabriel Fischer's core music works too. The greatest pieces of music are not created by viewing the art of music as "mathematics". One can learn to play the guitar or follow vocal lessons but you can't teach someone talent. And you cant' teach someone how to be original. You either have it or not. Anyone can create something, and that's good, but the most unique pieces of music weren't created just by "numbers" or just because someone wanted to follow a specific plan and/or direction and sat down to write music from 9 in the morning to 3 at noon. You can write and perform great music that way and many of our favourite albums were created that way. But the greatest and most original ones will always be the ones created spontaneously. With passion and fire. And not planned to be written at a specific time.

Vangelis (Evángelos Odysséas Papathanassíou) died on May 17th of 2022 and he is known as one of the greatest musicians born in Greece. His music is spread not only in every corner of the Earth but in space too. Vangelis was self-taught, no one taught him how to write and perform music, he had his own code of creating music, and he believed that music guides the human being and not the opposite. In Vangelis' world of ideas and harmony, one can write a piece of music because one thought about it and how this piece was planned to be. But one can also write music spontaneously, without thinking of it, just like Vangelis did. Music found him, he believed.

Music is all over around us, everywhere in the world we know and understand (and the things we don't) and it's coming to you. In the '70s, some people would call it "jamming" but in reality (whatever reality is in the Theory of Forms) the artist's greatest talent is to be always available for music ideas, at any time. Then, the artist should have the fire needed to light up the creativity and expand the idea. And that's how I view Tom Gabriel Fischer and all true artists. 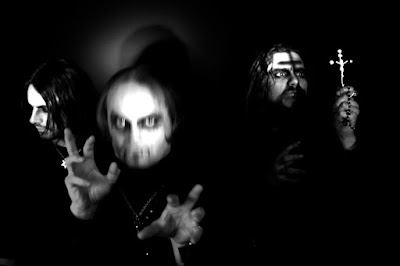 Tom Gabriel Fischer and Martin Eric Ain had a background of sadness and their childhood years weren't easy. They had a vision in music and things they wanted to do but at the same time there were limitations in technical capabilities. But the vision and the talent was there. Both of them started reading books about different aspects of the occult, philosophy and everything else that helped them shape their own beliefs. They started creating their own imagery, symbols and ideas. Music can be found everywhere, even in darkness, nothingness, silence. Stare into the abyss, and the abyss stares back at you.

Monotheist is crushing and intense, a scary and dark album. Every lyric, every line, every note, every symbolism, every detail, everything has its meaning. And those meanings create a larger idea, larger than the album itself, larger than Celtic Frost. Monotheist is a unique experience. Abyss itself.

Everything will come to an end.

On April 2, 2008, Tom Gabriel Fischer left Celtic Frost, the band that was his own life's work, the content of his existence. Celtic Frost has always been fraught with adversity from the inception to the end, a confrontational entity that doesn't fit anywhere and Tom is the soul of this entity. Not an act, but the essence and the soul. On June 16th of 2008, there was a statement by Martin Eric Ain & Franco Sesa (who was also Martin's close friend and the voice that disagreed with Tom), mentioning among others: "Tom Gabriel Fischer has left the band, but Celtic Frost is still alive, albeit in a coma of sorts. Franco and I are not going to continue recording or touring as Celtic Frost. This would be preposterous without one of its founding members, the original voice and its defining guitarist. But we are not going to officially disband Celtic Frost."

Tom's reply to Martin is known, since it was posted in his (incredible) blog Delineation II sometime ago, mentioning among others: "I explicitly think it is wrong to give fans cause for hope when there is none. There will be no reunification of Celtic Frost, at least not with me. Just how many times should we reunite and dissolve the band? [...] I cannot imagine reuniting Celtic Frost one more time, not with me and certainly not without me."

In September of 2008, Martin Eric Ain and Tom Gabriel Fischer discussed the situation and agreed that any continuation of Celtic Frost without either one of them would be absonant and decided to lay Celtic Frost to rest, with respect to their ideas and the legacy of this unique band.

It seemed though that Martin Eric Ain was already tired by touring and the "band" life in contrast with his comfortable life. "Martin lives on a different planet to the rest of us", Fischer told Iron Fist magazine, in 2014. "He runs an empire of clubs and bars in Zurich, and we're not talking about metal clubs - he runs the hipster clubs. Martin is a millionaire and that's his world now". But the lives of all those surrounding him, will never be the same without him. Tom's, also.

There wasn't any other sign of Celtic Frost. Martin Eric Ain left the mortal world on October 21st, 2017 by heart attack.

After two triumphant studio albums (Eparistera Daimones 2010, Melana Chasmata 2014), Triptykon released Requiem (Live at Roadburn 2019) including 'Rex Irae (Requiem, Chapter One: Overture)', 'Grave Eternal (Requiem, Chapter Two: Transition)' and 'Winter (Requiem, Chapter Three: Finale)'. Celtic Frost's requiem was originally begun in autumn of 1986 and its first part, 'Rex Irae', originally appeared on Into the Pandemonium album. 'Winter' originally appeared on the Monotheist album and Fischer started writing it in 2001. It was supposed that the requiem should be concluded once Celtic Frost recorded the second part but in the end, requiem was presented in its entirety by Triptykon with the Metropole Orkest.

Then, the Triumph of Death walked upon us again. 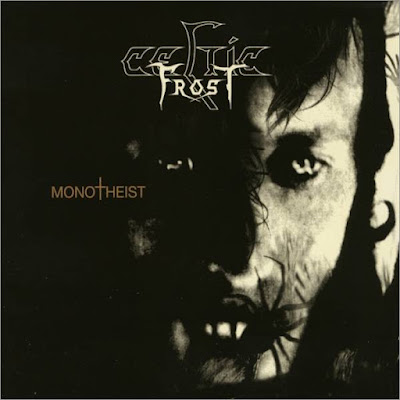