HEAVY LOAD Back Catalog To Be Reissued; More Things To Come


HEAVY LOAD - DEFYING THE POWERS OF THE DARK SEA

No Remorse Records and Gabriel Management are immensely proud to present something on many Heavy Metal fans wish list: the most exciting series of re-issues of the decade.


They are widely held as the band that started the whole Swedish Heavy Metal wave with their first album in 1978. In addition, they are regarded as the first Viking Metal band in the world. HEAVY LOAD, a name that electrifies fans around the globe. A band - a name that never ceased to reverberate and fascinate. In fact, a list of the bands that officially admit that they were influenced or inspired by this mythical Swedish act could turn out to be endless. 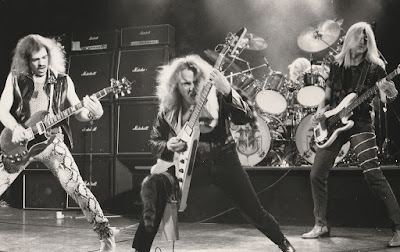 THE RESURRECTION OF THE LOST HEAVY LOAD RECORDINGS

Due to the  famous flood that  devastated Thunderload Studios back in 2001 (one meter of water for five hours), the HEAVY LOAD tapes had been evacuated, scattered, misplaced and believed to be damaged beyond repair. After arduous efforts trying to find and restore the tapes, the band´s founding members Ragne and Styrbjörn Wahlquist discovered that the recordings could be re-mastered.


These legendary albums have been out of print since the eighties. Bootlegs with poor sound quality have been abundant, and they are continuously selling in increasing numbers to new audiences around the world. In fact, no licensed CDs have ever been made (despite their often legal appearances) except for the rare Japanese releases from the Eighties. But, for ages, fans, journalists, musicians influenced by the band, as well as people of the music industry have tried to persuade Ragne and Styrbjörn to reissue their original recordings on both CD and vinyl LP. And now, at last, they will.

In order to guarantee the best sound quality, the reissued LPs and CDs will be remastered directly from the original analogue tapes. This will be done by Ragne and Styrbjörn themselves at Atlantis Grammofon in Stockholm – one of the few studios that still have the capacity to handle recordings the old analogue way. Now, finally, you will be able to hear the albums the way they were meant to be.


These official reissues will be expanded with bonus tracks. Some of these tracks have never been heard by the public before – demos and songs recorded for the albums which had to be dropped due to the limited playing time on LPs. The reissues will be available both as CDs (in deluxe digipak packages) and vinyl LPs (in gatefold covers). Both the CDs and the LPs will have the same bonus tracks. The CD covers will be coupled with great booklets, designed by the Wahlquist brothers themselves. Both the CD and the LP booklets will feature previously unpublished photos, as well as stories about how the songs came about.

HEAVY LOAD was founded in 1975 by two brothers: Ragne Wahlquist (vocals, keyboards and guitar) and Styrbjörn Wahlquist (vocals and drums). In 1978 HEAVY LOAD released their first album "Full Speed at High Level" - during an era when the Swedish media and record industry claimed that Hard Rock was dead and that the band was doomed to fail. The Wahlquist brothers’ vision has always been the core of what HEAVY LOAD was all about. So after expanding the band with a second guitarist, they founded their own recording facility, the famous Thunderload Studios, along with their own label, Thunderload Records. On their own label, they released timeless classics such as "Metal Conquest" (1981), "Death Or Glory" (1982) and "Stronger Than Evil" (1983) by HEAVY LOAD.

At last, due to an epic pact between the band and No Remorse Records, the back catalogue will be made available again. This series of ultimate reissues will start in the early Summer of 2017, with their last album "Stronger Than Evil" and continue back through their production.


But that’s not all of it. Far from it! As 2018 marks the 40th anniversary of their debut album, HEAVY LOAD prepares something special. Something special to DEFY THE POWERS OF THE DARK SEA.