The Lord Weird SLOUGH FEG will be back in Greece after many years for live shows. I’ve seen them recently in Germany’s Keep It True Festival and the band is in great shape as always. Been also one of the most original bands out there for 20 years of true and unique Heavy Metal after 8 albums, gave me the opportunity to have a few words with Professor Mike Scalzi… 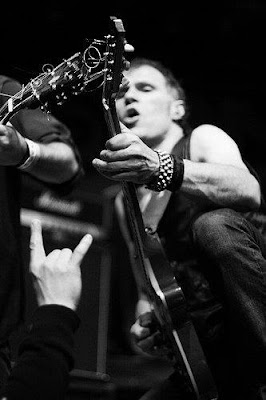 You started the band in order to create an original metal band and you succeed it through the years. Your attitude and music is just “Slough Feg”. Do you think that this originality kept you outside the halls of fame?
Perhaps. I’m not sure. It may be that I don’t promote myself very much. It may be that we refuse to sound like other bands, or that we don’t kiss the ass of the media, or that we are old and ugly (well, actually that’s not keeping a lot of bands out of the halls of fame…)

After all these years though, Slough Feg is a very respectful name in the underground metal. Most of fans, when they talk about “underground metal”, they consider this as the purest form of metal music, true metal and stuff like that. What’s your opinion on underground metal?

I don’t know. I don’t know if I have an opinion on such a broad subject. I don’t think underground metal is necessarily free of trends, that’s for sure. But there are many good underground bands, and thank god there is an underground where you can make the kind of music you want to. I never really wanted to be “underground” necessarily, I just wanted to do things my way and that seems to be the only way to do it - to be underground. But the word “underground” seems to be losing its meaning lately, because there’s so much music out there that its hard for anything to become mainstream - so almost everything is underground now, good or bad, right or wrong.

This is an interesting question. Because newer bands are not attaining the kind of fame the old ones did. Will they be replaced?  It’s hard to say. I would like to think that younger, good bands will replace them. I always wanted to be one of those bands. But I don’t know if that’s going to happen. To be honest I almost wish some of the bands would stop playing, because they are not all ageing very gracefully. Even Maiden, who is physically ageing gracefully, is a musical embarrassment, at least on their latest albums. And live they’re really not what they used to be either. Of course this is coming from someone who thinks that Maiden was the greatest live band on the planet for years, and has made some of the greatest records ever as well. I don’t know what’s going to happen. If Heavy Metal becomes unfashionable and all the bands break up again like they did in the nineties, well, it’s not going to change what I do. It didn’t then and it won’t now.

Which one is your favorite Slough Feg album and which one do you think is not as you wanted it to be? 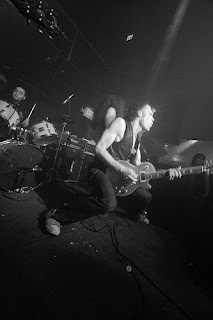 I think “Down Among the Dead Men” is our best album, but my favorite might be “Twilight of the Idols”. “Traveller” did not turn out the way I wanted it to completely. And for that matter “The Animal Spirits” didn’t really either. “Traveller” was never really finished. I didn’t have the budget (time) to finish all the parts I wanted to and re-do a lot of stuff. So to me it sounds incomplete. “The Animal Spirits” sounds slightly tame to me. I really like “Atavism” though. That came out almost exactly the way I wanted it to.

Which are your favorite albums and bands in general?

There is Slough Feg, but you also have your job, as an academic professor. When and what was the point that made you realize that life moves on beyond music?

When I could not make a steady living at it. I didn’t want to spend the rest of my life doing something I hated everyday and living just for the month or two out of the year I spent touring. That’s not a good life, working in a warehouse or something all year around so you can do what you really want for a couple months. It’s a life of drudgery, and I did it for years. Teaching gives me an exciting life every day, and that’s what one needs to live a full life. Sure, I would love to be a rock star. But I’m not one. And I think even if I was I would want that other dimension of my life, an intellectual pursuit as well as music. But really, music is my main passion in life. I never stop doing it, and nothing else gives me the same feeling. We still practice at least once or twice a week and perform almost every month. I cannot live without it.

It seems that as time goes by, philosophy has a stronger appearance in the lyrical content of Slough Feg, especially in The Animal Spirits. What the future holds for Slough Feg?

I don’t know about that. There have been philosophy lyrics from the first album onwards. I don’t know what the future holds. I guess whatever feels right at the time. I don’t write many lyrics in a pre-mediated way, like “this song is going to be about this”. I just sort off see what words come out of the music. Really the music says what I want to say, and the lyrics just help express that. In philosophical terms, how would you describe your music?

You know, here in Greece the economical crisis caused a lot of problems in our society and lives. The whole world is walking to a dead end and things must change. According to you, which are some of the things that brought us here and how this situation could change?

Well, I’m surprised that we are coming to Greece at this time. I’m happy about it, but it surprises me  that promoters are able to pay for all of this at this time in Greece. I wish I could give you an educated opinion on this current state of affairs, but to be honest I really haven’t kept up on the news and have only a vague idea of what brought on this crises.

How are things in the States?

Um, well, that’s a big question. A lot of people are out of work and there are huge economic problems. But I’d be lying if I told you I had a good understanding of what’s really going on economically speaking, or what the possible solution would be. It doesn’t look like there’s a realistic solution in sight though, unfortunately. Thank god I still have a job.

It has been a long time, so what should we expect from your upcoming live shows in Greece?

I feel like I should be asking you that question! I think you can expect a long set full of songs from all of the Slough Feg albums. Maybe a few more grey hairs than last time as well. A good show though for sure.

Slough Feg will play live in Greece for two dates: 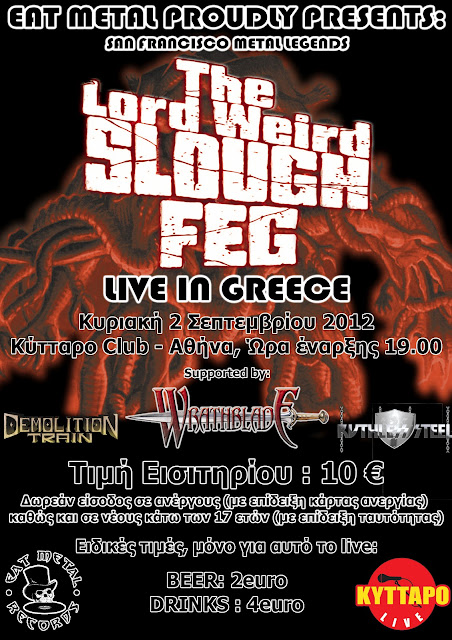 For the show in Athens, there will be also a special price in the bar.
Beers (big cup): 2 euro
Drinks: 4 euro