RAVENSIRE interview - Portuguese Steel & the Iron Will of Underground Metal

RAVENSIRE is a new band from Portugal, and some of the (not so young!) members might be familiar to the true underground die-hard supporters. CRYSTAL LOGIC spoke with guitarist Nuno Mordred and he introduce us the band, their first upcoming release and some other important things concerning the underground metal scene. 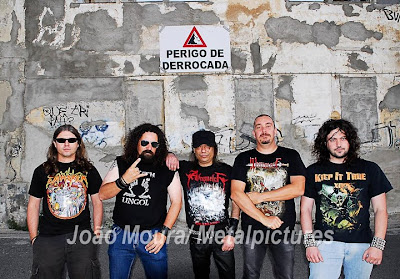 Introduce us the band and tell us when did RAVENSIRE were formed and what's your goal?

The beginning of RAVENSIRE can be traced to a few years ago, when I (Nuno Mordred - guitars) and Rick Thor (bass) started jamming out to some riffs I had created. But since we couldn't find like-minded individuals, we decided to take our time and just let things roll. It wasn't until F decided to start playing drums that things really came together. He found a rehearsal space in mid-2011 and we started to take our jams more seriously. After a couple of months, Zé RockHard (guitar) and Zé Gomes (vocals) showed up on our sessions, and since they were great friends of ours, had similar points of view and had been involved in music, it was a no-brainer to ask them to come aboard! And so, in November 2011, RAVENSIRE was officially born. Our goal is simply to play Heavy Metal the way we've always enjoyed listening and have fun doing it!

Which are your influences and how would you describe your music?

Our influences come from a variety of sources. We could name-drop a lot of ultra-obscure releases (we're ALL passionate about demo and underground stuff from the 70's onward) like everyone else is doing these days, but instead, I'll just say that IRON MAIDEN, early MANOWAR, OMEN, MANILLA ROAD, SLOUGH FEG and a few others would cover our basics very well! No need to show off hahaha! The best way to describe our music is: RAW and PASSIONATE.

Soon you will unleash to the metal world your first official release. Give us all the available information.

Our first mini-CD is going to be called "Iron Will" and A Forja Records (or The Forge Records), owned by the metal maniac Francisco Serrano, will release it somewhere in September. If all goes well, a vinyl release is also planned. It will have 5 tracks: 4 originals and 1 cover. In this CD we wanted to do a tribute to the 80's Portuguese Metal scene, so we ended up choosing Zé Gomes' old band from those days: WILD SHADOW! It is a relatively unknown band that released a few demos in the 80's, but hopefully we'll generate some recognition on their behalf.  Curiously, I saw them playing live in the 80's and would never imagine that 25 years later I'd be doing a band together with their first vocalist! 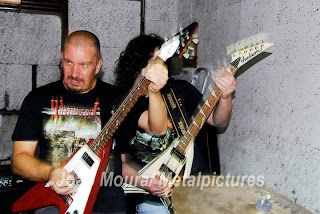 Are there any live shows in your plans? 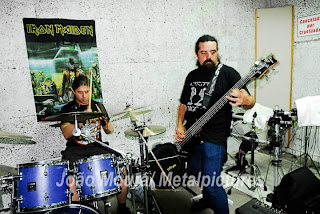 For sure! Having a Heavy Metal band and not playing live music is like eating a pork souvlaki without pork meat (I guess Rick would enjoy that, though)! We're going to do live shows starting in September. We already have one date confirmed and a few others being worked out. We're actually quite excited and eager to play live!

Well, playing what our hearts want is very easy! We just need to follow our will and not expect anything in return other than a genuine pleasure in doing what we love... That's how I've always viewed Heavy Metal in my life! That's why I travelled as a fan to a lot of places (Athens included...Twice!) to see the bands I love. I'm doing exactly the same now with RAVENSIRE, only on the other side of the "stage", so to speak! Of course, having this huge financial crisis doesn't help, because right now things are terrible and we need to be very careful on how we spend our money...

There are many reunions (even from obscure mediocre bands), many new bands coming on surface (almost every metalhead tries to play metal...) and at the same time, the huge "brand names"/bands (Judas Priest, Black Sabbath, Ozzy, etc) are about to retire because they will not be able to perform/compose decent music. So, how do you see Heave Metal in our days and what the future holds?

I've been saying this for quite some time now: 99% of the reunions SUCK! What's the point of getting together people who have been far away from Heavy Metal for the past 20 (or more!) years?? Most of them don't even like the genre anymore! Also, what's the point of reuniting bands that released a demo-tape with 4 tracks in 1982? I have the utmost respect for bands like BROCAS HELM who've been more or less active non-stop for the last 30 years... Or for Bill Tsamis who after WARLORD spent the 90's doing music with LORDIAN GUARD... or Tom Gattis who has been playing and composing in bands since the 70's, and other guys/bands like these examples! But those are NOT reunions... As far as reunions go, I'd say there are a few bands that did it for the right reasons, but lately the onslaught of reunited bands is just too much! And in the meantime, for each reunited useless band, you get a contemporary band that DOESN'T have the opportunity to be featured on live shows! Everybody nowadays praises the 80's and the "spirit"... But I can tell you: back then, we weren't looking or supporting extinct bands from the 70's or the 60's! We were supporting all the bands that were ACTIVE and making music we enjoyed! This nostalgia trip is one of the things that’s destroying the scene nowadays, in my opinion! As for the future... Well, I always say that the 90's were the most pure era regarding Heavy Metal. Although there weren't many bands and fans back then, the ones present were genuine and supported each other! There were no high expectations, no big labels wanting to cash in, no big festivals to try and win a free holyday trip! Nothing! Just pure love for the music. And that's how I see the future: when all these trends, and reunion frenzy, and labels milking the scene will move on to other places, the few left will be pure again and will count on each other for support. 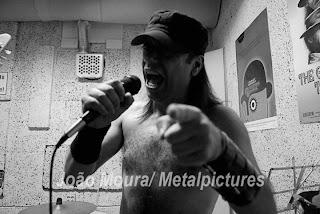 And at that point, how do you see all the related metal labels and metal music industry in general? 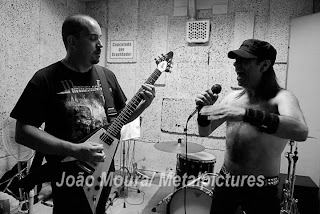 As I hinted in the previous answer: the bigger labels don't care shit for Heavy Metal. They only care for the money Heavy Metal is bringing them! Most of them, a few years ago, were actively making fun of Heavy Metal, and now they sign lots of Heavy Metal bands?!? Well, they are signing because a) the Heavy Metal bands accept their contracts and b) the fans end up buying the stuff! I'll never give money to those labels... I prefer spending money on underground releases by some hard-working bands and labels that support the scene no matter what...

You are in the beginning and I hope you will play the music you love for many years. What should we expect from RAVENSIRE in the future?

Well, although as a band we're on the beginning, we're all veteran metalheads and we've been on the scene for quite some time! I started in Heavy Metal in 1984 or so, Zé Gomes started even before that (1979-1980) and organized the first Portuguese Heavy Metal festival in 1984 (curiously in my hometown, with SEPULCRO, MAC ZAC, XEQUE-MATE, STS PARANOID, VALIUM and JAROJUPE - how's that for a line-up!?), Rick Thor comes from the mid-80's too, F is a bit younger but has been into the scene since the early 90's... Zé RockHard is the junior and has been into Metal for "only" 10 years! So, we really know what we want and this band is not something born out of some juvenile hard-on! We are now composing new tracks, will start to play live very soon, and hopefully next year we'll also start working on our first full album that'll be RAW and PASSIONATE!

Thanks a lot for this opportunity to promote RAVENSIRE, Andreas! If any reader was curious enough by my ramblings, I urge you to go to www.facebook.com/Ravensire or www.myspace.com/ravensire.epic and listen to the tracks. Also, a big HAIL to the Greek Metal scene!