TANITH interview with Russ Tippins; "Music is my life". Debut album "In Another Time" out now.

TANITH is a new band including a not so "new" musician, Satan's Russ Tippins.


Their debut album In Another Time is a passionate vintage hard rock that harks back to the glory days of Blue Öyster Cult, Thin Lizzy and Uriah Heep. However, while such influences resonate through the band’s music, Tanith never derivative, having a strong musical identity and forging their own sound.

Russ met Cindy Maynard playing covers in clubs and pubs in Tippins' native UK, but it soon became obvious that they wanted to create content of their own, and form a full band. Deciding to locate the act in New York, they recruited close friend Charles Newton on guitar and drummer Keith Robinson to realize this so Tanith line-up is completed as: Russ Tippins (guitars, vocals), Cindy Maynard (bass, vocals), Charles Newton (guitars) and Keith Robinson (drums). 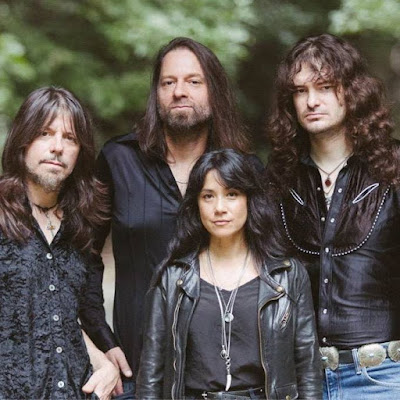 Russ Tippins speaks to Crystal Logic about the formation of the band, the debut album In Another Time and everything in-between.

When did you start thinking about the formation of Tanith as a new band? Was it sometime during The Russ Tippins Electric Band shows in United Kingdom? Give us the detailed diary of this new entity and how Tanith did came to life.

RT : The official birth of the band was October 2017, about a month before we recorded the two songs for the 7” single. But for maybe a year leading up to that, Cindy and I were playing in a band around the north of England, exchanging lead vocals while playing our instruments. It was really just a bunch of covers for kicks while she was visiting me. In turn I was spending an increasing amount of time visiting her in New York so it seemed a no-brainer to try and put together some kind of outfit so we could do the same while I was in town. One of my best friends in Brooklyn over the last five years has been Charlie Newton. On several occasions we’ve sat up all night with guitars in hand and beer on the coffee table. He was definitely part of our plan for the New York band. Then one day I said, “hey I have this cool song idea that would suit two voices - let’s record it”. That was the song ‘Eleven Years’. We asked Charlie and Keith to help us record it and booked the studio. Once we’d done that, we were never going to settle for playing covers. It just blossomed from there.

When you recorded the first two songs, ‘Citadel’ and ‘Eleven Years’ in late 2017, did you believe that actually Tanith could continue in full form or did you think that this would be something else? I assume that since music is your job, the bands you're in, are all part of this job, right?

RT : It’s my job yes, pretty much. But more than that music is my life. That said I am a realist and I think that getting those two songs self-released and maybe playing some local shows (whenever I was in NYC) was as far as I could see it going. But then I couldn’t shut down the creative urges and the ideas kept coming. On top of that, Cindy and Charlie were also coming up with ideas of their own. Pretty soon it became evident that if this continued we would have enough material for a full length. But then, we’d also need a label to help out with finance for the recording costs. And all of that actually came to pass in less than a year of formation. It really feels that, from out of nowhere I suddenly find myself in a signed band with three of the best people/musicians I could ever wish for. Sometimes life is so bizarre. You just never know what is around the corner.

What's the story behind the name "Tanith"?

RT : The first time I heard the word Tanith was in a 1960s Christopher Lee movie called ‘The Devil Rides Out’. Great movie, wonderful music and Technicolor visuals. The name of the lead female character was Tanith and I always liked the sound of it. When Cindy and I were brainstorming for band names I said the word aloud and she liked the sound of it too and asked what it meant. I had no idea so we looked it up and saw various references to a mysterious and powerful mythical being. A female leader! This seemed perfect for our female fronted rock band.

Did you have any specific plan of how Tanith should sound and how did you come up with two voices? I have to admit that this sounds very interesting, but how do you also separate your vocal parts?

RT : In terms of sound, it had to be distinctly different to Satan’s music. I even play a different type of guitar with Tanith - a Les Paul, which I am not used to. I actually struggle to play things on a Les Paul that seem easy on a Strat. I had to find another way to play, and that’s a good thing. As to the two vocalists, that’s also something which distinguishes this band from many others. I think it’s refreshing to have both a male and female voice.  It widens the scope of the song and sounds more complete in a sense. I always had a yearning to sing on stage in unison with another vocalist. Cindy and I have a certain rapport having sung together on in cover bands way before Tanith. It just feels so good to be writing our own music now.

RT : No it wasn’t. When we decided to get serious and start work on a full length, the first thing I did was to contact Metal Blade to see if it was something they might be interested in. They said it wouldn’t be a good idea to have two bands on the label both with the same guitar player as it could lead to a conflict of interests. I thought okay then let’s look elsewhere. As it turned out, other labels then started to contact me saying they liked the single and would love to work with Tanith on a full album. Anyway, we continued working on the record and by the time we finished the recording we had offers from four labels on the table. We really couldn’t decide what to do. Then out of the blue I got a call from Metal Blade asking if Tanith had signed up with anybody yet? I said no we hadn’t and they said “well don’t - until you hear our offer”. I couldn’t believe it. It turned out that, although I’d emailed them mp3 versions of ‘Citadel’ and ‘Eleven Years’ when I first approached them, they didn’t actually listen to them. But the boss of Metal Blade Germany had actually bought the single himself and loved it so much that he called Head Office in LA and told them they had to sign Tanith.

What about the lyrics and the ideas / meanings behind them? For example, we have ‘Citadel (Galantia Pt. 1)’ and ‘Wing of the Owl (Galantia Pt. 3)’ in the album. Since these are my favorite tracks from the album, I have to ask, where is Galantia Pt. 2?

RT : Okay, both ‘Citadel’ and ‘Wing of the Owl’ are part of a three piece concept story called Galantia. After we wrote and released ‘Citadel’ it seemed to us that it was kind of an unfinished tale, so we began writing the words to a follow up story called ‘Seven Moons’ and even a further episode which we titled ‘Wing of the Owl’. We were very happy with the whole story and although we managed to create some great music for part three, sadly we just couldn’t come up with anything that worked for part two and we simply ran out of time. So ‘Seven Moons’ will have to wait until the next release. For your information since that time we did manage to write some music for this piece that we are all very excited about!

RT : If you must know, we recorded the whole thing on analogue tape, mixed it down to analogue tape and cut the master on a vintage lathe machine. All very expensive and time consuming, but yes, I’m glad you picked up on the sound. It’s entirely different to just about everything out there right now. I guess I’m the only one in this band who’s previously had experience of making music this way. I wanted to try it again for this LP. Recording digitally is cheap but it makes every band sound the same. And it’s too easy to cheat and correct mistakes on the computer. I do miss the days of having to actually get it right first time or else live with mistakes on your record. I miss the beautiful sound of magnetic tape.

RT : I don’t necessarily believe it’s going to be easy to be accepted in the metal world. There are metalheads out there who regard even Satan’s music as “lite beer” so Lord knows what they’ll make of Tanith. Even heavy metal journalists can be somewhat reactionary in their outlook. We are happy to play for metal crowds though, if they like you they can be fiercely loyal. I think we made a lot of new converts when we played Frost & Fire fest in California which was very encouraging! Having said that, our sights are not set squarely on the metal world, but the world at large.

I know it won't be easy to answer, actually I don't know if there is an answer, but when do you feel more satisfied as a musician, when you play with Steve Ramsay and Satan or when you play and sing with Cindy Maynard?

RT : Why can’t it be both? At the end of the day I am still playing music that I’ve been a part of creating. That is a key factor for me. I would say the biggest difference between the two bands is that with me and Steve, we’ve been playing together for nearly forty years. On stage it’s almost telepathic, the interplay between us. That is something that will require more time and experience for Tanith. I will say however, that even though this is a new band, there are many times over the last five years when Charlie and I have sat up all night playing guitars and putting the world to right!

Do you have any plans for live shows and what the future holds for Tanith?

RT : In the short term, it seems people are curious about Tanith and will probably check us out. We need to make sure we bring our ‘A Game’ to the table at both Muskelrock Festival and the album launch in New York. The real test will be when we start visiting places for a second time, and get onto a follow up album. There will need to be something more than curiosity to retain interest. Hopefully the music itself will take care of that. I believe in this band with all of my heart and there is no question we will maintain the standards we’ve set to date.

In Another Time is out now on Metal Blade Records 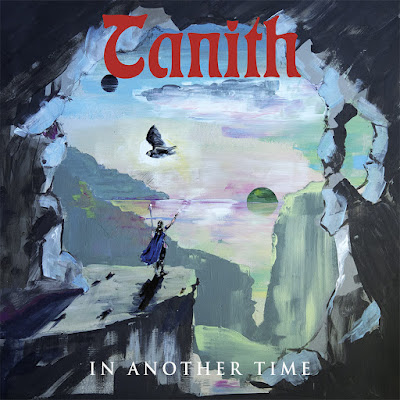