The Voice of the Cult: Leather Leone interview

Back in the '80s, before gothic / symphonic / Nightwish-like / female fronted metal acts, it wasn't the most regular thing to see a woman performing classic heavy metal. We had few known ladies like Doro of Warlock and Jutta of Zed Yago and many more not so known but still great, but there was also that voice in the classic Chastain albums such as The 7th of Never and The Voice of the Cult. Chastain was among those great US heavy power metal bands and Leather Leone can be easily described as the "female Dio".


Leather’s first solo album, Shock Waves, was released in 1989 and nearly three decades later, we have a new Leather album, simply entitled II. Leather II was released one year ago and we had a talk with the Voice of the Cult that remained unpublished. Until now. 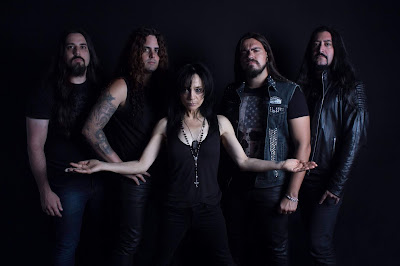 Like that time back in the '80s, the solo album of Leather is released while Chastain (the band) is still active and between Chastain releases. But why now and which are the differences from the first Leather release? Leather replies without missing a beat, "I found this band in Brasil. They are a group of rockers that think like me and want the same thing. Opportunity can come at the most unexpected time in your life. The difference being now I am the boss. I am playing and creating my own rules as opposed to following the leader..."


The first solo album (Shock Waves) was indeed more in pair with the Chastain albums since David (Chastain) wrote most of the music. However, there is a trivia on the first Leather album; the title track is written by Mark Shelton of Manilla Road! David Chastain and Mark Shelton had a long friendship and collaboration, and they even recorded few demos back in 1988, which officially released few months ago under the name Shelton / Chastain, and the title The Edge of Sanity.


Back to Leather II now and 2018, what kind of stories do the new songs might carry? "I wrote this record mostly with Vinnie Tex (guitars) and Rodrigo Scelza (my manager)”, says Leather, to continue, “It was our blood sweat and tears that made it come to be. Daemon Ross (guitars) had written a couple songs that we decided to use. Lyrically for me it was based on my experience of meeting and getting to know my new family. And of course, my catholic upbringing always influences my thoughts."


Someone might say that Leather II sounds more focused than the latest Chastain albums and songs like ‘Lost at Midnite’ carry a strong '80s heavy metal vibe. According to Leather, the answer is simple, "Rodrigo certainly had the idea to just do straight ahead metal. Simple and pure. And I wanted a no frills, basic record. But the songs really just happened quite naturally for us. We connected immediately musically."


Back in the '80s again, Chastain was one of the greatest underground US metal bands but somehow the momentum was lost after the fifth album For Those Who Dare (1990). This is the kind of memories that are lost in time, or just forgotten… "It was so long ago to really remember... but Chastain was not a fan of touring. The club touring that we were doing wasn’t growing. I wanted to keep going and attempt to grab on to bigger labels and the opportunities that came along with that. We had different ideas. But I’m not even really sure of the offers Chastain had..."


Chastain reunion (David and Leather) just happened and in 2013 the album Surrender to No One appeared out of nowhere. However, after 6 years, still there are no signs of Chastain live shows. Back in 2015 I had an extended interview with David Chastain at Crystal Logic, where David told me, "I much prefer the studio. While I enjoy the hour on stage I don't enjoy the other 23 hours involved in touring." However, in late 2013, after the release of Surrender to No One, live shows were also mentioned in one of the emails we exchanged and he checked the possibility of a Chastain mini-tour in Greece. He even checked flights and expenses but nothing came of it because I didn't push it. But even if I did (with the right people involved, I guess) I don't know if it would finally happen or it was just a note in a general discussion. A Chastain live show in Europe would be something really great, though! David is such a talented guitarist and composer.


All this time, after For Those Who Dare (1990) until 2013, David Chastain released some solo albums plus some more Chastain releases. During that period, Leather got into animal medicine, did a record with the Sledge Leather project and was living the California life style waiting for the next chapter.


The '80s was a blessing for classic metal. Leather recalls, "The eighties were an incredible creative time. The blessing of being able to record and tour was life changing. I don’t live my life with regrets, it is as it was. I’m still here to change and improve all of it”, is a statement and proves that Leather is as strong as her voice.


Chastain never played in Europe, but Leather performs occasionally with her solo band playing all those classics. "He (David Chastain) doesn’t want to tour. My focus is touring with LLB, the Leather Leone band”, simple and plain, Leather wants to deliver. "The audience’s everywhere are incredible. Anytime I can share music with friends is what life is all about. I look forward to continuing my story".


And yes, the motto “Love & Dio” has a special meaning for Leather, "I had the privilege of knowing Dio. It has an effect on my musical life still. He is always with me”.


So, what the future holds for Leather? "Hard to predict the future. It has always thrown me a curve ball. So many situations have changed already... I hope to tour, I wanna play the UK and make music with my boys. Only time will tell."