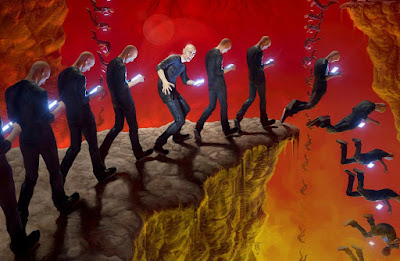 The era of social media, information online, sites, wikipedia and editing is going mad. There are articles written on countless websites and some printed magazines, that are based only on random "google search", without serious research, knowledge and logical flow. Many of those "editors-writers", haven't even read interviews from the people involved in their articles and the editors' knowledge is based on online sites that after continuous editing, have annihilated part of history, the facts and the truth. Moreover, it seems that you can't have an exact online source anymore, since everyone, everywhere, is editing.

Besides the wrong information, there are also cases of targeted misinformation. Most recently, you can read on Wikipedia about Neat Records, a paragraph mentioning: "After musician Conrad Lant began working at the studio in 1979, he convinced the studio to begin a label for rock and metal bands". 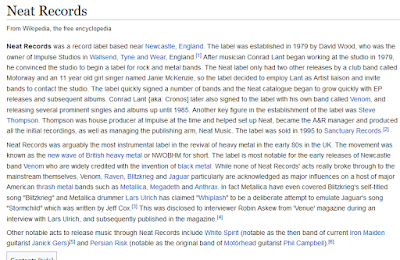 That "editing" and that "information" came to the attention of Steve Thompson, the house producer at Impulse at the time who helped set up Neat, became the A&R manager and produced many of the recordings. Steve Thompson posted on Facebook: "Conrad was just 16 and was on a youth employment scheme (ET) as a tape op. Lovely lad but that's a completely inaccurate statement. Nobody made a decision to make Neat a metal label. It just happened".

Over the last many years, there are various attempts by Conrad Lant (Cronos) to change the history of VENOM and everyone involved. The funny thing, is that many articles that will be written in the future about VENOM or Neat Records, will be false, because "someone" wrote a false information on Wikipedia. This is just a recent example and there are many websites out there, known or less known, filled with wrong information, false translation of news and articles that present falsely data as facts. And those articles and news are re-posted on social media spreading false "knowledge". This is not just like an old printed review on a music album or a film, in a magazine or newspaper, which was failed through time. This is something different and this is probably an early part of the decline of all media. Important or not, professional or amateur.


While many people don't really read anymore and just scroll down on bold titles, thinking that this is just enough to "know", there is also an inexplicable attempt of some people to downgrade the importance of many media (mostly printed but online, too) and books that were created with hard work and true research. You can't blame them I guess, but this kind of research is missing today and it is replaced by the kind of "research" that is edited all the time due to poor sources, lack of knowledge and logical flow. If you will make a mistake online, you can just change it. You can correct it... or you can make a bigger mistake. I can even edit what YOU are reading now, so if I will write something false or fake, you won't have a proof of what you were reading. I am sure that everyone who writes all the time has made mistakes, but in the world of press (printed and online) you can write hundreds of great articles and/or reviews, and you can just write once, something wrong. People will mostly remember that one time. The mistake. But I guess that this is what happens to life, also. In the modern digital era, bitching online about everyone and everything is just another daily moment. And that daily moment is the new "news" and the new "article". I don’t know if "only print is real", but if the historians of the future will base their research only on this kind of data, they will probably have a different view on the world we’re living.


We are living in 2019, the same year of the dystopian world of the film Blade Runner. However, the world is nothing like the one on that iconic film, but also nothing is as it seems in reality. And the worst is yet to come.

"The greatest enemy of knowledge is not ignorance, it is the illusion of knowledge", someone said (google it...)

Speaking of Blade Runner, there is another quote on the second film, Blade Runner 2049: "Then ten days of darkness. Every machine stopped cold. When the lights came back, we were wiped clean. Photos, files, every bit of data. Gone. Bank records, too. Didn't mind that. It's funny only paper lasted. I mean, we had everything on drives. Everything, everything, everything."