We must be over the Rainbow! The story of RAINBOW Rising. 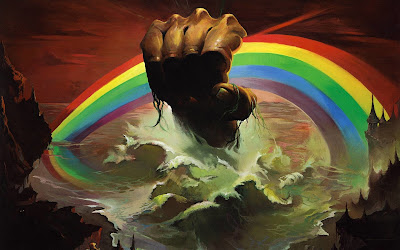 Originally released on May 17th of 1976, Rainbow Rising is one of the greatest albums of the '70s and a very important album for the continuation of heavy metal music in the '80s. It can be viewed as one of the cornerstones and the foundations of epic heavy metal and (European mostly) power metal, even if the "Kill the King" track off the next album Long Live Rock 'n' Roll (1978) is THE iconic track for the roots of power metal. However, "Kill the King" is actually a Rising-era song and was written as a show opener for their tour since it was first heard during the 1976 live shows, making its first record appearance in the live album On Stage (1977).

Rising was recorded in February 1976, at the Musicland Studios in Munich, Germany, produced and mixed by Martin Birch, with all songs credited to Ritchie Blackmore and Ronnie James Dio. Blackmore is mostly responsible for the music and Dio for the lyrics, vocal lines and the "melody" side of the tracks that was built around Ritchie's riffs. That epic hard rock / heavy metal, the medieval aura of Blackmore's music, Dio's voice and lyrical themes are among the absolute cornerstones for metal subgenres in the decades that followed. Already older than the others (even Blackmore), Ronnie James Dio (born Ronald James Padavona) was nearly 35 years old during the recordings of Rising and already started establishing his own vision of what he wanted to do. Ritchie Blackmore though, was an important key to that, if you will consider the fact what Dio was doing before joining Rainbow. Ritchie Blackmore actually led Dio to that path and from that point and on, Dio always walked his own path, cleverly keeping what he was learning from the great musicians he worked with, starting with Blackmore, followed by Tony Iommi in his Black Sabbath first years, and kept all those elements and "lessons" in his Dio (band) career. Needless to say, that his role was also important in both Rainbow and Black Sabbath but if we will consider that the greatest albums he ever sung to, were (probably) Rainbow Rising and Black Sabbath Heaven and Hell (and Mob Rules), those songwriters-persons (Blackmore and Iommi) were most likely the puzzle pieces created the greater image.

When Rising hit the stores, there was also that image on the cover. The iconic image, the cover art of Ken Kelly that made people think at once that there was something huge in that record. And they were all right. Ken Kelly's art for the cover of Rising is not just colours on a piece of paper, it is part of the album's DNA, the first thing people saw back in 1976, the first thing that draw attention, the image that comes in mind when you think of Rainbow Rising, an idea of Ritchie Blackmore, perfectly brought to life by Ken Kelly.

Music is what it is, created under certain circumstances and inspiration, performers are who they are, the producer and the recordings is another important step and when everything is finished, you cover them in an image - a package and the "product" is ready to go public. Musicians, songwriters, producers, executive producers, artists, the perfect cooperation of all parties, the momentum and the moment, is what creates transcendent pieces of art available to the public. And Rising is one of those historical pieces of art where everything worked perfectly. From the moment where Blackmore understood that there were musical differences with his Deep Purple bandmates, the moment he started discussing with Ronnie Dio about the Quatermass "Black Sheep of the Family" song, how he started working with Dio and his Elf bandmates on a single that ended as a full album under the band name Ritchie Blackmore's Rainbow, mostly for people and press to know that Blackmore left Deep Purple and started a new band, that became just Rainbow.Everything was destined to led to the perfection of Rising.

Line-up changes were already in the mind of a few people, meaning Ritchie Blackmore and label executives, who believed that Rainbow could be something huge, similar or even bigger than Deep Purple. Drummer Gary Driscoll was replaced by Cozy Powell, something that Dio didn't really like. Bassist Craig Gruber was replaced by Jimmy Bain, unknown at the time but a very easy-going person, so Blackmore had the concise rhythm section he really wanted, less "busy" and more "on the beat". Keyboarist Tony Carey completed the line-up and Rising was recorded in less than two weeks! 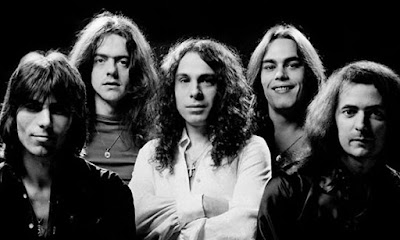 Lyrically, Blackmore suggested Dio to write a song about a tarot reader and "Tarot Woman" was born. "Her love is like a knife, should cut away your life" sings Dio, using themes he kept visiting in the future, especially about the female nature of things and women ("Lady of the Lake", "Lady Evil", "Country Girl", "Gypsy" and many more). "Can you feel the change begin" and "Run with the Wolf" is actually a song about werewolves inspired by old horror films, while in "Starstruck" Dio is talking again about a woman, this time about a Blackmore's stalker, "she's there, somewhere and looking back at me". "Do You Close Your Eyes" is one of those simple lyrics that just came to Dio's head when he was asked to write something for a faster song but then, "there's no sun in the shadow of the wizard, see how he glides, why he's lighter than air". "Stargazer" is the ultimate Rainbow saga and one of the most iconic Dio tales; a story told by a slave, about a "wizard", that enslaved an army of people to build him a tower of stone, so he will go to the top of the world and fly to the stars... just to fall down and die. "All eyes see the figure of the wizard as he climbs to the top of the world. No sound, as he falls instead of rising. Time standing still, then there's blood on the sand, oh I see his face!" and after that, "A Light in the Black" follows the story of the slaves that are now free... "Can't forget his face, what a lonely place, has he really let us go?"

While the song credits mention only Blackmore/Dio, we can't deny other members' contribution and ideas, like Tony Carey's keyboards and synths, starting with the album's opener first minute. "Tarot Woman" is one of those great album openers with a mystique vibe and besides Uriah Heep's Ken Henslay, the presence of Tony Carey in Rising is an important part of how keyboards were used in many heavy and power metal bands in the decades that followed. When "Run with the Wolf" starts, you have that clear and precise beat, courtesy of Cozy Powell, an important person to the final result, offering also one of the greatest and most iconic drum intros for "Stargazer", whose riff, Blackmore originally wrote on the cello. A transcending song where Blackmore also gives credit to Dio for his songwriting contribution, a song that features the Munich Philarmonic Orchestra and inspired the album title with the line "I see a rainbow rising", as also the cover art. Side B of the vinyl record is always sounding as a concept with "A Light in the Black" following, another influential song that many people consider very important... except Dio. Being a singer, he didn't really like the long music parts and all those guitar and keyboard solos that sounded to him mostly as a musicians' exercise. The funny thing is that Dio always liked more the debut album of Rainbow and despite Rising's importance, the band mostly performed live just "Stargazer" and "Do You Close Your Eyes", even if they tried just a few times "Starstruck" and "A Light in the Black".

The Rising Tour was a huge success and at that time, Deep Purple were already disbanded. However, that line-up didn't last, the band changed direction but back in the '70s (and the '80s) history was written in just a few years (even months) and everything was spread faster than the new, digital age. Incredible how, but influence and legends were raised very, very fast. It didn't take more than a few months to make history, in some cases even with a few live shows or a few-days recording session.

At the time this article is written 3 out of 5 of the musicians that performed in this legendary album, are no longer with us. Ronnie James Dio, Cozy Powell, Jimmy Bain, you will never be forgotten and your legacy will live forever.


There in the sky, I see your star. 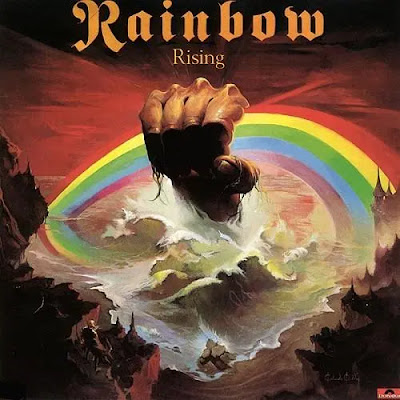