2022 was just like the previous year: It had countless albums! Everything is easier and everyone can record an album easier. It is easy to release it also, even if many of them sell just a few hundred copies. Everyone can become a "recording artist" and the music industry has changed a lot over the past two decades. And keeps changing.

Everything you will read below was written within a few hours or something. This is not filtered or worked within a bigger time frame of days just like other features, just the first things that come to mind. 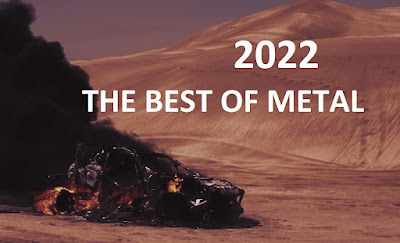 The Top-20 list was already completed in late November since it was asked from Metal Hammer magazine in Greece (where I am also a scribe) but let me add one short comment: No one really cares of what's added in place 18 or 19. In this list or any other list. It's all about what's in and what's not, but this also can be somehow "wrong". You know why? Because almost everything that's from 10 to 20, might change in a few years and one could add something that didn't make it to the list. For example, on a second thought, I really like a lot SAVAGE MASTER's Those Who Hunt at Night and I should add it, while the song "The Pilgrimage" from SAXON's Carpe Diem is better than most of the songs in any 10 to 20 albums of that list. Go figure...

However, the Top-5 albums on that list, are really TOP-5, 9/10 albums, with the first two ones (sharing the TOP spot) being future classics, possibly 10/10 albums. These are the best of the best, albums that we will mention many times in the future, albums that will take place in future "best of" lists.

Among the rest (most of them 8/10 albums) there are albums I really enjoyed, albums I listened to countless times, albums that I am going to listen to for a long time in the future too, and of course I bought all of the albums in that Top-20 list, plus the majority of the rest that are mentioned.

Let's go to Crystal Logic's Top-20 (plus many more you should check also!) 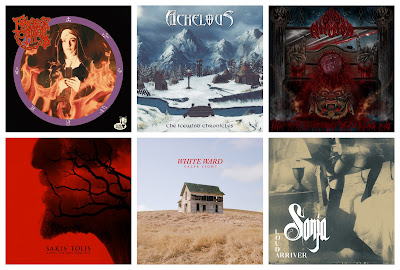 20. FRIENDS OF HELL - Friends of Hell

Looks like a dream team including Master Tas and Albert Witchfinder. The debut release of the international group, named after the classic WITCHFINDER GENERAL album, is traditional Sabbathian doom with one of the most iconic doom metal figures on vocals, that will attract fans of early CATHEDRAL, doom-y NWOBHM and PENTAGRAM.

From the cold winds of Olympus to the flames of war, the Mediterranean epic heavy metal of ACHELOUS is praised by the underground metal hordes.

Master Tas strikes again with a grower that will be appreciated more in the future. MIRROR's third album is their most "metal" one, including killer songs such as "Souls of Megiddo", meeting also Arthur Rizk's approval of a great album.

Check  also: CLARENT BLADE Return Into Forever : That's a special case that starts with the best epic metal song of 2022 most people won't listen to! It's probably because of the vocals and I can't blame them for that but the songwriting here is ace. This is something that can be huge. Remember the name.

During the covid months and lockdown days, Sakis Tolis of ROTTING CHRIST wrote an album that brings in mind late '90s vibes of his main band.

When multi-instrumentalist, composer and guest musician in False Light Mykola Lebed was asked to describe the art of WHITE WARD in his own words, the reply was:

"I would describe it with a picture: it is like you are strolling through the woods in the mountains while the storm is becoming more intense and harsher. But all this happens inside of you. The themes of their lyrics are resonating with me very much. It can be a song about personal feelings, about the grace of nature, or also about Kateryna Handziuk – the activist from Kherson - who was killed by an acid attack."

WHITE WARD is definitely one of the most innovative bands in the wider field of black metal, mixing experimental black metal, blackgaze and dark jazz.

Often mentioned as "sounds like" UNTO OTHERS (former IDLE HANDS), this is actually a zero-fucks-given heavy metal album with an all-around-mentallity filled with different moods. Strong candidate for best debut album of 2022. 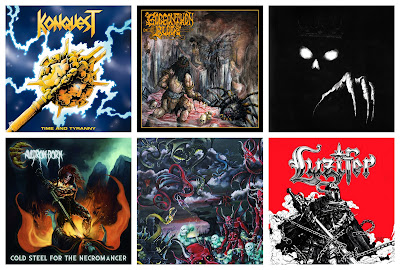 In the debut album they sounded like modern day HEAVY LOAD but now they managed to add a strong MAIDEN's somewhere-in-time guitar sound. Just listen to the majesty of "The Light that Fades Again". A beautiful and a feel-good album!

The blackest and truest black metal album of 2022. The spirit of black metal dwells in those songs. Just for the few; the brave ones, the black souls.


10. DAEVA - Through Sheer Will and Black Magic

"Free yourself from iron shackles!" is one of the most addictive lines and songs of 2022! The German lads sound like '80s Swedish kids that moved to England.

SEVEN SISTERS' Kyle McNeill heart is all over an emotional album coming from the depths of his soul. Beautiful melodies, a warm sound, excellent songwriting.

Teaming again with old friends, Ozzy recorded a few of the most emotional and best songs of the year, including "No Escape from Now" (with Lord Iommi), "One of Those Days" (with Eric Clapton) and "Mr. Darkness" (with Zakk Wylde).


6. GRAVESPAWN - Scourge of the Realm

Battles, swords, demons in the mist, the impaler and blood. The best black metal album of 2022 is probably the epic black metal release you ignored and need to listen to. Perhaps you think you listened to better black metal albums this year but you definitely didn't listen to more epic ones or more suitable guitar solos in a black metal album.

5. THE TEMPLE - Of Solitude Triumphant

The DOOM METAL MANIFESTO of 2022. The purest, the truest, the saddest, the deeper. True Doom Metal.

Crystal Logic admires Phil Swanson. The iconic performer is teaming up again with his old friend from SEAMOUNT, Tim Schmidt, and they deliver a heavy Sabbathian doom metal debut album that obeys the RIFF. The most riff-driven album of 2022, a favourite one that will be revisited forever.

This is art. A deep concept and music worked in every detail. Technical power doom metal, not your REVEREND BIZARRE style of doom, but the one that's written and performed just by a few. Simply because just a few can record this kind of music that has an epic doom metal heart but it's not regressive and allows elements from US power and progressive metal filtered by the band's character creating something new. Do you want name dropping? SOLITUDE AETURNUS, MEMORY GARDEN, MEMENTO MORI, CONCEPTION playing doom, even SAVIOUR MACHINE vibes.

There is a lengthy feature written for this album already. This is a classic, best album of 2022 part one.

Best album of 2022 part two. Everything is on fire here. The blood of a legendary classic metal album runs in Electric Elite. One of the most praised classic heavy metal albums of 2022, from both underground and mainstream media, a speed metal mayhem, an electric power metal vengeance. Many claim to be the next big thing but don't get fooled by false prophets. This is the real thing.