Nearly after 30 years, US metal legend HEIR APPARENT returns with a new album! Seattle, WA's Heir Apparent was founded in 1984 by guitarist Terry Gorle. During 1985, Heir Apparent signed with Black Dragon Records and completed the first album "Graceful Inheritance" that was released in 1986. Up to this day, the debut album of Heir Apparent is considered as one of the best US metal albums of the 80s.
After highs and lows in the music industry and lineup changes, finally the band was signed by Metal Blade Records and released their second album "One Small Voice" (1989), one of the best progressive metal albums of all times. Although the future looked bright, tensions surrounding commitment and finances within the band caused a rift that split the group.
In 2011, Crystal Logic had a detailed interview with Terry Gorle regarding the history of Heir Apparent and you can read everything about the past HERE.
"The View From Below" is the title of the third Heir Apparent album that is set for release on October 15th of 2018 via No Remorse Records.
"The View From Below" is produced by Tom Hall and Heir Apparent. Tom Hall has also produced all the previous Heir Apparent releases and he has also worked with Queensrÿche on "Queensrÿche" EP (1983) and "Empire" (1990), among others. 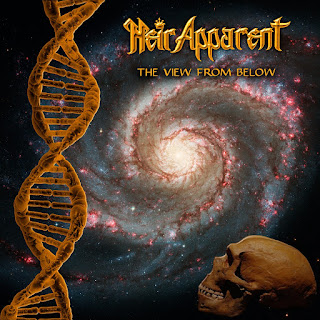 Terry Gorle is a very intelligent person and you can regard Heir Apparent as "thinking man's metal band", something that was used in the past for Queensrÿche. We tried to approach Heir Apparent and "The View From Below" differently than most interviews and since we already spoke about the past 7 years ago, now we are talking about the present, the future and the world. This is a very special and thoughtful interview with Mr. Terry Gorle.

- Heir Apparent are back with a new album, nearly 30 years after "One Small Voice". "One Small Voice" was different than the debut album "Graceful Inheritance", and so it is "The View From Below" compared to the other two. One name, three albums, three different musical statements. What connects those albums?
TG: The bassist, the drummer, and the guitarist! This seems like a question for the critics to answer, since my only goal is to write good songs that are fun to play, and utilize the talents of the singer. The band has a general philosophy about mankind being the guardian of the planet, and the importance of rising above cultural delusions and inequality, so I suppose there is a continuity in the general themes of our song lyrics.,
- "The world has made its choice, there is no turning back now". Does the world reflect each one of us and are there choices that can't be undone? Or we just gave away everything to the "Man in the Sky"?
TG: Will’s lyrics alternate between statements from a personal view, a cultural view, a view from a segment of society, or a generalized impersonal overview of a world condition. This leaves many things open for interpretation by the listener, and I think it allows every person to find what they connect with and relate to. Personally, I think almost anything can be undone, but whether or not problems can be fixed depends on the power of the forces responsible for creating and prolonging the problem, or their ability to indoctrinate and control perceptions…
- "We hold the key to unlock the door and open our minds". Isn't this a choice or "The Door" is so well hidden that there is no choice after all? What choices Heir Apparent did in the past that should be better locked behind the door?
TG: Again, the listener has the freedom to find their own interpretations. To me, the lyrics represent oppression by any form of government or cultural institution that hides the truth from the public. This is a common element in several of our songs over the years, speaking to individual strength and the quest for knowledge. To be independent in the sense that you use your own mind and not be an unquestioning follower or victim of deception.
- "Everything gone in an instant, sometimes over before it began". The new album is completed and it is out there. Do you believe that in the current music industry MUSIC and ART really matter for the masses or everything is few clicks in fast-forward and everyone has an opinion for everything despite his knowledge or not? Are we here or "Here We Aren't"?
TG: Well, the sad state of an instant gratification society and the constant propaganda of marketing to either drain your wallet or drain your brain is disconcerting. I hope that people can pull their heads out of the sand and be smarter than that. For me, this is a very emotional melancholy song about birth and death, the occasional feelings of futility that everyone feels from time to time, and the idea that our lives are inconsequential within the bigger picture of our infinitesimally small place in this vast universe over billions and billions of years. Ultimately, this life is all we have, so we owe it to ourselves to make the very most of every moment to be the very best we can be. Although there are no lyrics at the end of the song, I am trying to express despair becoming a sense of hope in the solo.
- "On these new paths deep inside my brain, all the charts and graphs can hardly explain". Have you followed new music over the last three decades and where do you believe Heir Apparent can stand today? Does it matter after all or you just want to create your own ART despite the "Synthetic Lies" of the industry?
TG: "Synthetic Lies" was conceived as a prelude to "Savior", and far more of a science fiction story about the human mind and its perceptions and vulnerabilities. I don’t follow music in general, as my time and extra money is limited. When I have time to listen to music, it’s usually something at least 25-50 years old. This album was written with a hope to appeal to a wide range of people. In 1985, the audience for our music was 14-30… now it is 14-65… We made no effort to go backwards or copy the past. We simply set out to write songs that we enjoyed playing that provided a landscape for Will’s talent. Hopefully the industry, or at least some people within the industry, will appreciate the fact we have come out of nowhere to create something unique and valid, that does not copy any trend or cater to shallow formula consumerism. 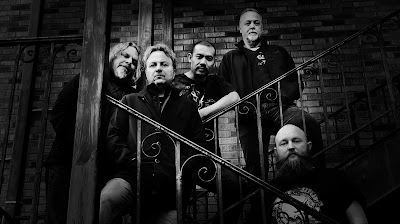 - "Man and machine sharing thoughts". How was the recording procedure of the new album? Do you believe that the way technology has evolved it affects music positive or negative?
TG: The process of recording this album was new to us. We did not use a traditional studio or record as a band playing at the same time like on the previous albums. I engineered all the instrument tracking at my house. Will recorded his vocals at Tom Hall’s house. The album was also mixed by Tom at his house. Digital recording allows endless variables, so you need discipline to say when enough is enough. We had time and budget constraints, so in that sense it was similar to using tape and analog… at $50 an hour, time has not changed over time. ;-)
- "Comfort is the enemy". The new album has a strong artistic vibe but it might be out of current trends. How "Further and Farther" do you believe you can go with Heir Apparent?
TG: It all depends on the fans and the industry. Today’s trend is tomorrows leftovers, so all we can do is create something we are proud of and let the people decide. We feel this is our most complete and comprehensive album that Heir Apparent has made. Our work is done for now. If the story of a band who can come back after 30 years to create a great album becomes something the industry decides to get behind, then we will take advantage of that opportunity. We know there is a certain existing fan base that will buy this and enjoy it. Our ability to survive as a band beyond this, let alone ever come close to the dream of being professional musicians, depends entirely on forces within the industry deciding to support this to an audience that as of today is unaware we even exist. If someone in a position of power decides this album represents a new trend, here we go… those things are out of our control.
- "All roads lead to Palestine". World, politics, jobs, daily life, the complete system of modern society seems lost. Are we really lost and every individual is trapped in daily routine? In the '60s and '70s people of the art made a difference with public statements. Can this happen again or we will never find "The Road to Palestine"?
TG: Good questions… to one extent or another, we are all living within those traps. As artists, all we can do is attempt to educate and spark conversations that open minds. People need to want to change, they need to want to make the world a better place. Sometimes the sacrifice required takes too much effort, and the day to day struggles provide an excuse for inaction. If mankind is capable of rising above their cultural delusions and vengeance in order to unite and find peace, all roads lead to Palestine. Mankind has a limited time to utilize science and technology to create a sustainable planet that can feed 10 billion people by 2050 without accelerating the extinctions of plant and animal species that are necessary for balancing this biosphere. We must unite in science and bring our best minds together before it’s too late.
The sad alternative is that cultural delusions and greed-driven politics will result in tribal factions fighting for diminishing resources, which will only buy the ignorant “winners” a short amount of additional time in a world far too damaged to recover. I’m not siding with the fatalistic, I’m presenting the reason for being reasonable.  It’s time for mankind to unite toward preservation of life on this planet. To bring this full circle… Art, and the ability to create it, is a luxury that can only exist when not eclipsed by whatever else is required to survive.
- "Chasing the dream". There are many positive reviews on the new album and you are already planning live shows for 2019. I hope "Insomnia" won't reach Heir Apparent and the silent whispers will turn to shouts. In every aspect. So which are your future plans?
TG: We are very encouraged by the early reviews. Now we wait for actual sales and the continued interest from promoters to tour and support the album. We have done the work and made the investment and sacrifice to be here for the fans, and we hope for the very best in return.
- And finally, why "The View From Below"?
TG: These are very strained political times in America and around the world.  The resurgence in nationalism, paranoia, prejudice, greed, propaganda, and corruption. “The View From Below” represents anyone looking at the world while suffering from oppression or inequality, either social, political, or institutional. Also, the album art suggests evolution and the connections that exist between everything in this universe… from a spiral strand of DNA to a spiral galaxy. Life, and existence. We look forward to performing for you in 2019, and celebrating this. 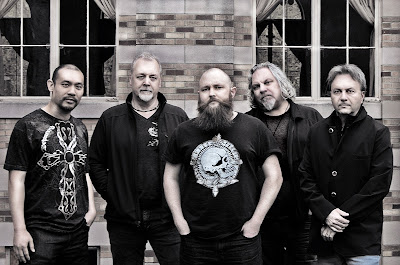