Now, let’s see what happened the last days. There was so much intense, passion and HEAVY METAL, that I want to keep it alive, not only as a memory (it won’t be forgotten anyway), but also for everyone to see that some musicians remain legends among men.

On October 14, 2012 there was Up The Hammers Festival Special Edition II in Athens with Manilla Road as headliners and Dark Nightmare, Etrusgrave, War Dance, Midnight Priest completing the billing of the best festival in Greece. Two day before we were expecting the arrival of Mark “The Shark” Shelton and he would be in Ragnarok club for “meet n’ greet” with fans and friends of the band. The good friend and organizer of Up The Hammers, Manolis Karazeris along with the people of the club, organized everything perfect and we knew that there will be an unforgettable weekend. Funny, but there was also a special Manilla Road/Up The Hammers wine limited to 20 bottles! Of course, I took one, but I will open it for a very special occasion. So, people all over Greece and certain friends around Europe start gathering in Athens. Back in the club, after 12 o’ clock Mark made his appearance in the club. It is always good to see this guy and for sure he is feeling like home when he is in Greece. He signed some records, took photos, had his drinks and chat with friends and fans.

There was a very funny moment, when we were headbanging during “Astronomica” near at a window in the club and suddenly we felt someone all over us… It was Mark climbing to the window! The night continued like that, but next day I had to go to the work… The next day passed easily for me, still though I had some time with friends that I hadn’t seen for some time. Of course we ate also. That’s one of our hobbies! 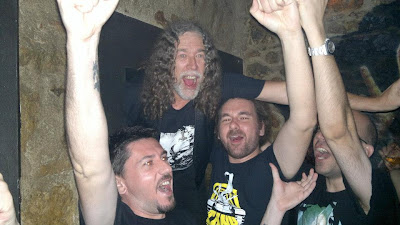 And then Sunday comes. I woke up early (I think…) along with my girlfriend, and went in the center of Athens to pick up our buddies from Patra. Of course we ate also. I told you, that’s one of our hobbies. And we only eat meat. I went earlier to the club of the festival (Kyttaro Live Club) because I had some work to do with the label. There I had the chance to see War Dance during soundcheck. I really love this band and for me they are the “next big thing”. 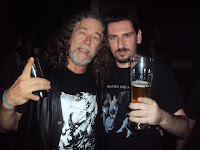 So, everything was set up, we’ve already start drinking and having fun. 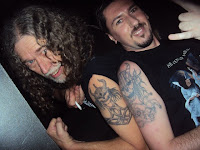 Midnight Priest was the first band to hit the stage and people started to enter the venue. The band was very passionate and they enjoyed playing there. Then I grab a beer and went to the front to watch War Dance. They are perfect. They combine elements from Manowar, Warlord and Sarissa, filtered through a personal sound and the result is pure lyrical epic metal magic. They have released only a promo CD but they are in recording sessions for the material that will be their first album. I can’t wait for that. After that there was some kind of problem in the club with electricity or something and Etrusgrave moved on stage and wait for the problem to be solved. It took a little time, but after that, the Italian band was a huge surprise. I didn’t expect them to play before Dark Nightmare, but if you would see the respond that Dark Nightmare had from the people there, you would be surprised. Great shows from both bands.

But there was a storm waiting to break… Arise all ye faithful to the sword... Manilla Road was on stage, for a special 3 hours set starting with my favorite MR album “Open The Gates” performed in its entirety. Magik, Dragonships, the Spear of Tiw, Fires, the Norns, Kings and the Dragon passed before our eyes and took us by storm. We were speechless from such a magical performance. Mark’s guitar was sending vibes from Hell and Bryan was singing with passion the hymns of mythical poetry. For my surprise, since it was the first time to see Neudi behind the drum kit, he really moved the band to a higher level. After “Open The Gates” the Road passed through “Necropolis”, “Haunted Palace” (Randy would be proud of Neudi), “Isle Of The Dead” (with a monumental moment of Agis throwing Jim off the stage!), “Masque Of The Red Death”, “Death By The Hammer”, “Hammer Of The Witches”, “Divine Victim”, “Dig Me No Grave”, “Metal”, “Crystal Logic”… and many more! During “Mystification”… well, I went a little crazy, but I think this will be my last stage diving - getting old I think. Still have bruises – for a moment I thought I broke some bones... but I enjoyed it! I really can’t say more for this performance. All you have to do is take a look on this video: 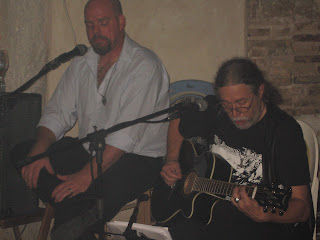 After two days, on October 16, there was a special event. A secret acoustic gig among few friends of Manilla Road (around 40 people) in a wine bar under candles’ light. Mark and Bryan with the help of Gianluca Silvi spoke straight to our hearts that night. There was a great moment where the original guitarists of Battleroar (Kostas and Manolis) with violin player Alex and Mark on vocals performed “The Wanderer”. A night to remember… with great friends and lot of wine!

I was very busy that week… and I was expecting a special guest. A good friend, a great person and a unique singer, but this is Chapter II…