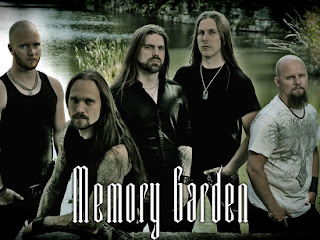 The Tides of Doom Metal...
Swedish Doom Metal masters MEMORY GARDEN just finished the recordings of their new album that will be released in early 2013 from Metal Blade Records. Standing always by the side of the band, since the first years, I contacted drummer/songwriter Tom Björn and discussed about the recordings and all the latest news of the band.

It’s been already 4 years since your last album “Carnage Carnival” and now you are in recording sessions for a new album. So, give us all the available info about it.

Yes, time really flies! We started to record the drums in June 2011, so it has been a long process for us. Because most of us have small kids we felt that it was impossible to hire a bigger studio for this album, and be away for weeks. So with the help of Dan Swanö we upgraded our own studio, and have spent in general five hours per week there. We all have daily jobs to go to, so we met one night per week after work to get something done. And here we are in December 2012, finished! The album is right now being mixed and mastered by Dan Swanö, and the cover is almost done as well. Once again by Hjules! This album will both sound and look fantastic, and I consider it to be one of our best efforts ever!

Since you are back in Metal Blade Records, why did you left at first place, after “Mirage” and how did you join them again?

Well, this was in  2002 if I recall correctly. We had once again planned on visiting studio Fredman, so we called him up and booked the studio for about two-three weeks during 2003. We needed some months to complete the songwriting. Then, for some reason, MB decided to cut our budget drastically. That meant we could no longer afford studio Fredman, which we had been looking forward to so much. We kind of lost all inspiration in a heartbeat, and wouldn't settle with some other studio. Which was pretty stupid of us... MB decided to drop us when we said we couldn't make a good album with that budget cut in half.
Some years later we signed with VIC records and they released Carnage Carnival in 2008. When we were getting ready with material for the new album, VIC was in some financial trouble. They simply couldn't afford to pay for another album.  So, without label again we decided to check with MB (among others) once more and they were happy to take us back for another round!

What about your musical direction? The early doom metal era of Memory Garden was watered with many progressive and power metal drops over the years and the last album had lot of differences from “Forever” or “Tides”, but all these years I consider you as a Doom/Power Metal band. What should we expect now?

I can promise that no MG-fan will be disappointed on the new stuff! It's pretty much the same foundation, doom with a few progressive elements and lots of heavy riffs to bang your head to! The melodies and Stefan's powerful voice are still there of course.
We have also used a bit more clean guitars and keyboards this time, and that has brought a more dynamic and atmospheric sound.

The line up remains the same?

Yes, it's the same since ‘08 when Andreas joined us. We don't want any more changes in that section now... We're working better than ever together and that feels great! 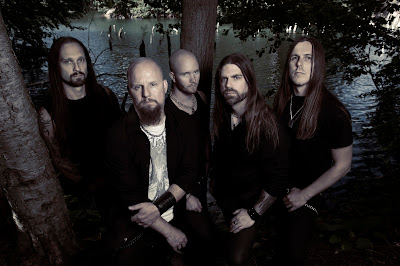 I am a big fan of Simon Johansson’s guitar playing - and also a big fan of Mike Wead of course (and Mercyful Fate/King Diamond style in general). How it feels to work with such a great guitar players?

We have been playing together since ‘96 and Simon has really become a great guitarist. No wonder with a mentor like Mike Wead! Simon has developed his style during the years and you can clearly hear influences from Mike in his playing, but I think he has a little different tone and has created his own style. I'm very happy to have Simon in the band, and also to have had the honour to play with Mike in Memento Mori.

You are one of the few drummers that contribute in writing music and lyrics. What’s the composing procedure in Memory Garden?

I got too tired hearing that every band has a couple of musicians and also a drummer... :)
No, actually I've been writing songs since I was 12 years old or something, maybe not so good ones but still... I think I have a good ear for melodies, harmonies and so.
We have always brought our ideas to the rehearsals and tried to put things together. And sometimes one of us brings a complete song to the table as well, then we try it out to see how it feels. We usually make the songs first, then vocal melodies and last the lyrics. I have written most of the lyrics for the new album, and I think it's easier to have a melody in mind to make the words fit better.

What is the true essence of Doom Metal for you?

Well, it must be the heaviness and slow-to mid-tempo. But on the other hand I can't stand listening to stoner-doom or songs that are too monotone, I find it boring. So I guess, for me, the important stuff are heaviness, groove, melodies and variation. A good singer is also a must!

It is obvious that you play the music you like, but how easy or difficult is for a band like you to survive in the music industry? 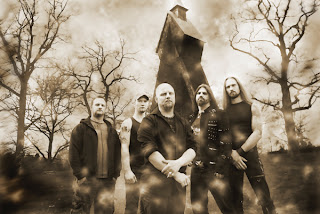 Since we're not making a living on our music it's not a problem. We have been lucky to land deals with record labels and play a lot of cool shows, and I think those two things are of great importance to stay on the scene. We don't have any hopes of riches or fame (that would be pure stupidity) and we appreciate every opportunity we're given. As long as we feel we have something to give to the doom metal scene, and the fans want us, we will keep composing the best we can.

I know that it is very early, but are there any plans for live shows after the release of the new album? People here, really enjoyed your shows in Greece.

Not at the moment. During the whole recording process we didn't play live even once, so now we look forward to that a lot! We will soon start rehearsing a setlist with some new songs in it, and as soon as the album is out we will hopefully be ready for some gigs again. But nothing is planned yet.
We would love to come back to Greece again!

Thanks for keeping up your interest in Memory Garden, we need your support! Hope you will enjoy the new album, cheers!