How many times have you listened to an album and besides each one's widely or personal reception, you recognize a specific element that sounds great? We don't want to write again about "great" singers or albums with the "best" guitars or the "best" solos, since there are probably many out there in magazines or the internet.

We're always trying to aim for something different, so this time we will present you a Top-10 (+1) of the greatest drum sounds in metal music according to Crystal Logic. A few of them can also be identified as albums you can also see in different "top" lists but note that we're not talking about best albums but about the best drum sound. 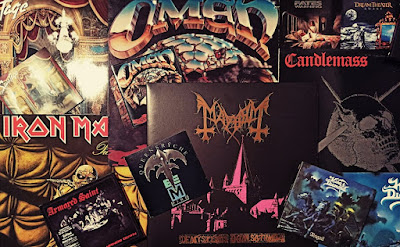 Still though, it is important to mention that besides the fact that a few of them were already in my mind as the "best", I revisited them again and in each album you can see the audio reference. What is most important is that these albums can only be listened in the physical format in order to feel and get the true magnificence of each one, and not in YouTube (even if we will add a link for a "glimpse") or torrents. After all, we need to mention that we're not taking seriously deep discussions about similar articles when the person in front of us is listening to music only through YouTube. It sounds elitistic but that's the truth, sorry.

Besides its historical importance, Mayhem's first full-length album has a phenomenal and huge drum sound that is perfected by Hellhammer's supernatural performance. Grieghallen (Grieg Hall) is a concert hall located in Bergen, Norway and named after the composer Edvart Grieg. That facility also had recording rooms and a studio. Pytten’s "Grieghallen sound" is the analogue sound of Black Metal and he understood the "chaos" of those young musicians and what they had in mind. Hellhammer’s drums for De Mysteriis Dom. Sathanas were recorded on the main stage of the concert hall in order to catch that huge sound.

Read about the story of Black Metal and what led to the creation of De Mysteriis Dom. Sathanas.

Audio reference: Vinyl (Deathlike Silence 2020 pressing). In this anniversary vinyl box set, you can also find a book with all the recording information and the saga of the album.

A bold and massive sound riding on reverb. Mikkey Dee's performance in Abigail can be identified as one of the greatest in heavy metal history and he recorded most of the album with just a specific part of the music so he could control what he wanted to put on with the less possible interference. Complex and at the same time exactly into-the-point, Mikkey's drumming and sound, added a huge part in the visionaire aura of Abigail, an album that is heavy metal, power metal, progressive metal, horror metal and everything in-between.

While someone can say that Iron Maiden is the most iconic '80s heavy metal band, Martin Birch is also the ultimate metal producer of the '80s. Starting with Killers in 1981, he connected his name with the "Maiden-sound" and the greatest albums in the catalogue of the British legend. Piece of Mind, one of the albums that can be identified among the most important cornerstones of influence for what followed (including a huge part of US Power Metal), is heavily connected with THE metal drum sound. Similar to the previous and the next Iron Maiden albums, that sound is the essence of '80s heavy metal drum sound.

The budget Omen used for most of their albums so far wasn't even close to the budget they had for the drums' recording only, of The Curse. And while Escape to Nowhere will always be an exception in their catalogue for many reasons (recording, too) in 1986 with Bill Metoyer on the sound, Kenny Powell and company recorded their best sounding album with that huge drum sound we surely miss nowadays with all those "same" modern metal triggered productions.

"Heavy Load's rehearsal room/studio was filthy, remote and cold", Leif Edling wrote in the liner notes for the 2011 CD reissue adding, "but we chose it because Trilogy's and Yngwie Malmsteen's demos sounded just great". In the Behind the Wall of Doom massive 3CD+2DVD compilation, there is a 92-page book written by Per-Ola Nilsson including many interesting stories and facts about the recording of the greatest Epic Doom Metal album, and that's all you need to read. Sounding wise, the drum sound of Candlemass' iconic debut is a grand element of the album, a drum sound that is overlooked and lost over the years because of better productions. Still though, every time I am listening to this album, I can't ignore the fact that this sound is exactly what the greatest Doom Metal album ever needed.

What Paul O'Neill did for Savatage and how the band evolved through ups and downs, is one of the greatest chapters in metal music. And while you can read HERE a few interesting bits of this story, that huge and fat drum sound was probably something already set by O'Neill while he was experimenting with the Oliva brothers for the songwriting and performance. Still though, that (probably) easy set up of the drum sound within the Sava-camp remains an example of audio magnificence for most of their albums.

The multi-platinum album of Queensrÿche is the pinnacle of their commercial success but at the same time, it is one of those albums that can combine the commercial sound with artistic elegance. Scott Rockenfield's drumming is one of the elements that added uniqueness and character in 'rÿche's intelligent metal up to Promised Land. From the early years of "Queen of the Reich" up to 1990's "Another Rainy Night (Without You)" the sound of 'rÿche was evolving and changing adding more catchy parts and songs, losing its heaviness in some moments but never its quality, leading to the band's most self-confident album. Without being the band's best album, the production of Empire helped the album's songs and kept Queensrÿche's name high in the charts and the hard rock & metal scene during a period where '80s metal started sounding "outdated" according to media and trends.

Produced, recorded and mixed by Terry Brown. Drums and percussion by Mark Zonder.

While audio experts and engineers, producers and drummers have many different opinions, those always come from the professional's side. On the other side, the only thing that probably matters is the sound coming out of your speakers, so if the listener enjoys what he listens to, it doesn’t matter how it was created. With that said, many modern productions might lack the organic, natural and analogue sound of the past (let's say that the "past" is the '70s, '80s, early '90s) still though the sound coming from your speakers can be massive. Or different. What Fates Warning really did with Parallels was something different but don't they always do?

Mark Zonder was always an unpredictable drummer with a unique approach and dynamic that drives against the "classic" heavy metal route. Parallels' production is perfect and Zonder's multi-rhythmic performance is like little songs within the songs but yet, everything is song-oriented and not complex for the listener while he also used electronic drums adding a variety of sounds in the album.

Produced, mixed and engineered by John Purdell and Duane Baron. Drums and percussion by Mike Portnoy.

Following the success of Images and Words, one of the albums that changed metal music during the '90s, the decade of experimentation and new subgenres, Awake is free of the triggered snare Dave Prater (producer of Images and Words) used and more or less the "holy trinity" of progressive metal is represented in this list with iconic early '90s albums that shaped the genre, created a new generation of fans and inspiring up to this day with their music, performance and sound.

Let's add a modern album, shall we? Not exactly "modern" but how heavy metal should sound in the modern era; Refreshing. I remember playing all the time Win Hands Down at the No Remorse Records' store in Athens, Greece, upon its release. One of those days in 2015, there was Fotis Benardo at the store, drummer of bands like Septicflesh and Nightfall, and also audio engineer and producer. While talking about a project we were working with, I noticed that he was distracted by the music coming from the speakers and he just said, "That's a great drum sound, what is this?" This is Win Hands Down, the album with one of the best sounding drums in traditional heavy metal over the last years. And Armored Saint did it again in the latest album, Punching the Sky.

I guess that this is an album that can't be missing from any similar list, whether we like it or not. Produced by Bob Rock with James Hetfield and Lars Ulirch, the multi-platinum album of Metallica, one of the biggest selling albums in the history of hard rock and metal music, was recorded over a few months, over many takes, different mixes and a final budget of one million US dollars. We all know what followed and the sound of that album influenced countless releases from Xentrix (Kin) to Paradise Lost (Draconian Times) and beyond.

So, what's your favourite drum sound?